PHUKET: Now that the inevitable has started to occur and the drownings without professional lifeguards on Phuket’s beaches have started, it is time for the Phuket Provincial Administration Organisation (PPAO, or OrBorJor) to quit posturing and get down to business. The game is over. It is time to throw in the towel on managing Phuket’s lifeguard situation, and let the municipalities take over.

opiniontourismaccidentsdeathmarine
By The Phuket News 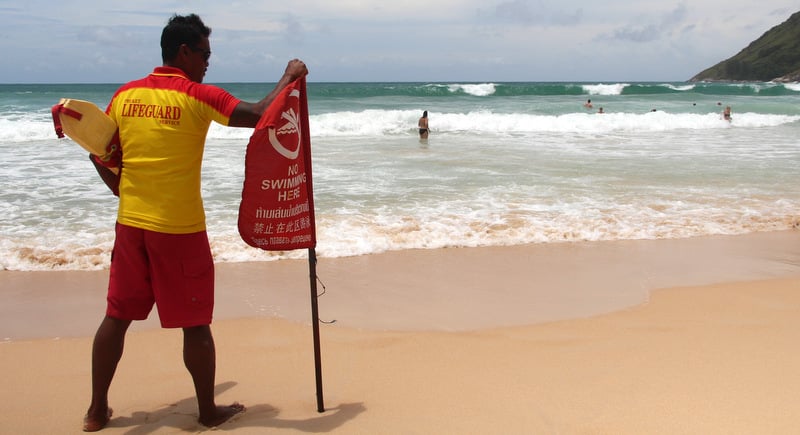 The latest plan announced by PPAO Acting Chief Watcharin Patomwatthanapong for the Navy to train municipal officers sometime in the future is unworkable and dangerous. (See story here.)

In its haste to assert itself over Phuket’s lifeguard crisis, the PPAO has totally missed the point. Their position is that Phuket Lifeguard Services Co Ltd, was no longer managing the service well and that a replacement agency is needed.

It is their right and duty to exercise sound judgement in this regard. What is not right, is that the PPAO is overlooking the most important group in the beach safety puzzle: the lifeguards themselves.

Phuket’s lifeguards have mismanaged nothing. They have done nothing wrong. In fact, many have done a tremendous job of late under very difficult circumstances. For example, there has not been a drowning at Surin Beach in over seven years. This does not happen by accident. The current lifeguards have the skills and the capability to do the job.

All they need is support – support in the form of a living wage in light of Phuket’s skyrocketing cost of living. A wage that reflects the dangers of the job. Plus equipment and beach facilities needed by lifeguards worldwide to do this difficult job properly.

Forcing or coercing Navy or municipal officers that have no interest in becoming an ocean lifeguard, and who do not have the necessary swimming ability and stamina, is a recipe for disaster. These capabilities cannot be gained in a three-day course. Years of experience are needed to be a qualified, journeyman lifeguard on Phuket.

It should be clear by now that the Navy is out of its depth in placing its own trained lifeguards on Phuket’s beaches. We have seen many examples this past week of why this doesn’t work. Navy guards aren’t trained to spot swimmers in distress, do not have sufficient rescue training in rough water, and lack the necessary equipment to do the job.

Attempting to turn Navy or municipal officers into qualified ocean lifeguards will only waste time and resources, when a pool of guards who are trained and ready to work already exist.

If the PPAO decided today to turn over the funds to the municipalities, qualified lifeguards could be back on Phuket’s beaches tomorrow. Waiting until November to train unwilling officers a rescue program that has been proven not to work on Phuket’s beaches will only lead to more preventable drownings.

Drownings that can only be prevented by qualified lifeguards who are properly trained and equipped.

It is time to get the guards back on the beaches now, at fair wages and benefits. In November, qualified, experienced ocean lifeguard trainers will be arriving in Phuket. The International Surf Lifesaving Association three-day training is taught by experienced lifeguards recognized as experts throughout the world. (See story here.)

Phuket’s lifeguards have asked them to come and provide this training – which is free. They will also donate equipment that has already been purchased according to the specifications of the lifeguards themselves.

Who knows better what equipment they need to save lives? The PPAO, or the lifeguards themselves?

Ignoring the talent pool of skilled lifeguards already in place, and attempting to coerce unwilling participants to do this dangerous and difficult job is wrong. Dead wrong.

This Opinion article was provided by a long-serving foreign volunteer lifeguard in Phuket who wished to remain anonymous. The Phuket News agrees wholeheartedly with this opinion.