ATHLETICS: I have seen an incredible phenomenon recently with many of the people around me starting to become more and more involved in exercise of various forms. Some run, some bike, some play tennis or badminton and many have made the big move into triathlon. 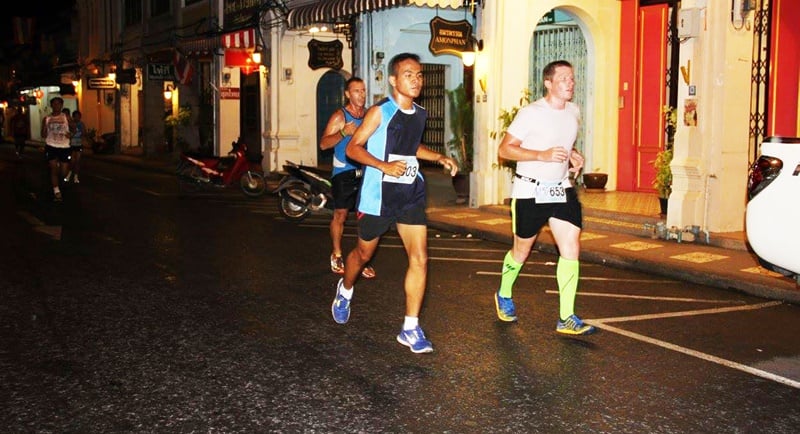 The event will take runners through the most scenic parts of Phuket Town. Photo: Phuket City Municipality

To me, as a long-time runner, seeing people exercise always makes me feel good, not just because I will have more friends in my circle, but more importantly, because it is definitely good for them both physically and mentally.

Some time ago I came across a guy who is also a runner, but not only that, he has been involved with a number of large-scale Phuket projects including the Smart City and Creative Gastronomy City initiatives to name a few.

But most recently, this man organised a very interesting running event, the Phuket Night Run, which this year will be held on January 28 for the 3rd year running. Yes, a running event that takes place at night, and the best thing about this event is that the route takes you through the beautifully lit Phuket Old Town during the darkest time of the day.

The route also takes you past some of the old town’s most symbolic places including the fountain circle (hopefully, there will actually be water flowing from the fountain when we pass), clock circle, and few more.

“This will be the 3rd consecutive year of the Phuket Night Run and we expect a high number of runners to turn out for the race.

“Last year we had runners from Bangkok and nearby provinces join us. We even had runners from Macau and Hong Kong too,” said race organiser Mr Bhummikitti Ruktaengam, who is also Vice President of the Phuket Tourist Association.

“Running at night will be fun. Runners do not need to worry about the sun, or getting up early. And you still have some time to have fun after the race,” he added.

The Phuket Night Run is an annual charity run with this year’s donations, which is B50 of each race entry fee, going directly to a project which helps bedbound patients in the city.

Anyone wishing to take part in the 3rd Phuket Night Run, which takes place at 10:45pm on January 28, can apply via www.phuketnightrun.com; check out their Facebook page, Phuket Night Run 2017, or simply call 098-9951954.

Want to know if I’m going to join the run? Definitely. This is a unique run, and not only will you have fun, you will also be donating to and supporting those in need in the city.

See you at the start line!