BANGKOK: Although it’s officially known as Wireless Road (Witthayu in Thai), this prestigious stretch of tarmac in Bangkok may as well be called ‘Embassy Row’ for the plethora of foreign embassies that line it. 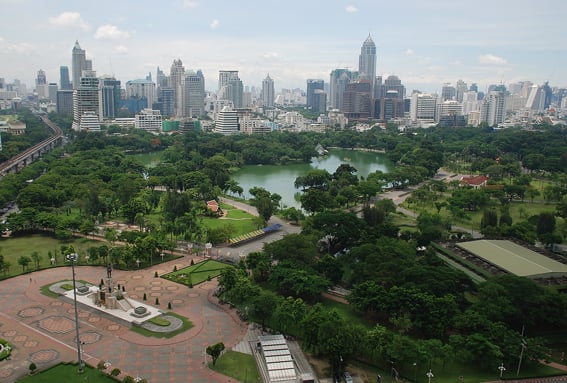 Lumphini Park is an oasis of green in Bangkok. Photo: Terence Ong At last count it was home to the British, Americans, Swiss, Dutch, Vietnamese, New Zealanders, and Japanese, while the next road over are the Czechs, Moroccans and Swedes, and just off its southern end – on Rama IV Road – are the representatives of Australia, Germany, Denmark, Austria and Canada.

If, like us, you ever find yourself visiting to pick up a new passport, and are stuck for something to do while waiting, you’ll want to read on for the top five things to see and do around Bangkok’s ‘Embassy Row’.

We wouldn’t normally recommend a shopping mall in a must-see roundup (though there are always exceptions such as Dubai’s pyramid-shaped Wafi, and Melbourne’s Renaissance-style GPO), but Central Chid Lom (central.co.th) is notable for being home to Bangkok’s best food court.

To reach it, you have to ride the escalators to the top of the seven-storey building – also accessible via a skybridge from the Chit Lom BTS train station – passing through areas dedicated to women’s fashion, beauty products, sporting goods, home décor, and children.

On the seventh floor, a large sign welcomes you to the Food Loft. To enter you have to pass through a turnstile and take a card – you hand this over when you order and then pay the amount stored on the card when you leave.

The level of sophistication is such that you’re escorted to your seat, while the food stalls resemble private chefs tables. No matter what you order – Thai, Chinese, Indian, Korean, Singaporean, Italian and more – it will be excellent.

Pine tree lane, or Soi Tonson to give it its Thai name, is quite possibly the shadiest street in Bangkok. Like many back lanes, it’s also home to much more than first meets the eye.
Starting from Phloen Chit Road, the first landmark you come across is Gianni’s (giannibkk.com), an Italian restaurant that has been serving up some of the best Italian food in town for more than a decade.

A short walk further down is Spa 1930 (spa1930.com), a boutique spa that occupies a 70 year-old mock Tudor house built for a Thai prince – the combination of heritage surroundings and upmarket treatments make for a unique experience.

If you’re in the mood for a little culture, halfway down the lane you’ll find 100 Tonson Gallery (100tonsongallery.com), one of the city’s top commercial galleries. Check out their website for details on upcoming exhibitions.

Finally, right at the end of the soi is the Tonson Market, where a number of stalls serve bargain-priced food from around Thailand to hungry office workers.

At first glance, you’d be forgiven for thinking that this large building – with its sloping, tiled roof, multiple columns, and distinctive Thai detailing – was a Buddhist temple.

The giveaway that it’s not is the small white cross that rises from the centre of the roof.
This is in fact the Holy Redeemer Catholic Church (holyredeemerbangkok.net), built in 1954 on land that used to be on the outskirts of Bangkok.

According to the church, the idea of building in the style of a Thai Buddhist temple was suggested by the late American Bishop Fulton J. Sheen on a visit to Bangkok.

He suggested to the rector Father Roger Godbout, “Father, when you get around to building a permanent church, why not build it in the style of Thai architecture.” Father Godbout did just that a few years later.

Today, as well as being a place of worship, where ‘Ambassadors kneel beside shopkeepers, and beggars sit next to American tourists’, it’s a very popular location for weddings – and a great photo op for the curious traveller.

Known as Bangkok’s green lung, this vast 142 acre park just to the west of Wireless Road is an oasis of calm in the otherwise bustling downtown area.

Started in 1925 by King Rama VI as a present to the people while the economy was in recession, the park is named after the supposed birthplace of Buddha in Nepal.

The equivalent of New York’s Central Park, or Hyde Park in London, it is one of the few large public spaces in the Thai capital, and hence is very popular with locals and visitors alike.

The 2.5km long network of running tracks fill up with joggers in the evening, while the boating lake attracts couples for a paddle in the swan-shaped vessels.

While it might seem ready-made for dog walking, canine companions are in fact banned from the park – as is smoking and cycling at most hours (though you can indulge in the latter between the hours of 10am and 3pm).

And it’s not just Bangkokians who escape here – Lumphini is also home to a plethora of wildlife, including 6 foot long monitor lizards.

If the Holy Redeemer Church is the area’s place of quiet reflection, then Lumpinee Boxing Stadium (muaythailumpini.com) is its frenetic, beating heart.

Opened in 1956, this 9,500 capacity venue is – along with the even older Rajadamnern Boxing Stadium – the most important venue in the world for Muay Thai, Thailand’s indigenous style of martial art.

Every Tuesday, Friday and Saturday nights, the country’s top fighters, along with a number of foreign pugilists, face off in the ring. Unlike almost every other sporting activity, gambling is allowed here, carried out through the use of a bewildering array of hand signals that wouldn’t look out of place on a stock market floor.

While foreign spectators are usually herded to the expensive ringside seats, true aficionados head for the second or third floor galleries for the better views and proximity to the betting action.

Expect to see around 10 fights over a four hour period, with the skill and ranking of the kickboxers improving during the night (the best fighters usually come on last).

It’s worth noting that the cheapest tickets for foreigners are B1,000, a mark up of 350 per cent over the Thai price. But at least everyone pays the same for beverages.

Explore a world of cuisine, wine and coffee in five restaurants, one bar and a bakery, and experience the ultimate in relaxation with a stunning tropical rooftop pool, day spa, and fully equipped fitness centre including jogging track and squash court.

Take the hassle out of travelling by reserving your room and airport transfer with their Travel in Style package, which includes nightly accommodation in the room type of your choice; daily buffet breakfast for 2 persons; and round-trip airport transfer by BMW limousine.

Rates start from B5,900++ for stays until December 31, 2013. A minimum stay of 3 nights is required. For more information on rates, visit plazaatheneebangkok.com