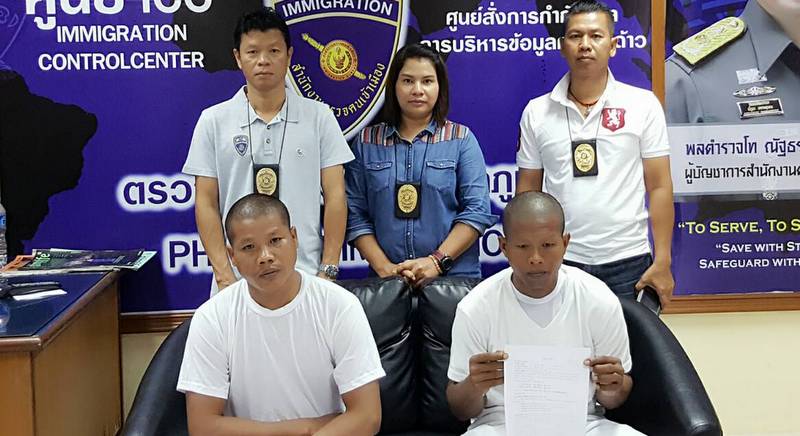 Immigration Police Lt Col Tienchai Chompoo led a team of officers to Muang Chaofa Rd at 7am (June 22) after a call from local residents complaining that Cambodian monks had been knocking on doors and asking for donations.

“Residents told us that these monks came every morning to collect alms and ask for cash donations to help them pay for transportation to go back to their country,” Col Tienchai said.

Officers waited in the area until the monks came, monitored their activity and followed them to their camp near the Chao Fa tin mine. The two men were named as Chanti, 40, and Nad, 35, he added.

“Officers searched the camp and found personal belongings and 2,000 baht cash, he said. We asked to see their passports and monk identification papers, which they did not have,” Col Tienchai said.

“Chati and Nad said there were four of them at the camp, but the other two already left the Kingdom yesterday,” he noted.

Chati and Nad had been arrested before for the same thing, back in 2014, when they were arrested along with 17 other Cambodian nationals who solicited cash donations as monks, Col Tienchai added. (See story here.)

Apparently all 19 in that raid, including Chati and Nad, were arrested and deported, he said.

“At this stage we are not sure if the other two have left the country or just moved to a different area. However, we will find them soon. If residents recognise them and see them around, please contact local police,” he said.

Chati and Nad were taken to Wat Mongkolnimit and “defrocked” by Phra Krumettapirom, then taken to Phuket Immigration Office in Phuket Town to be charged with staying in Thailand illegally.