PHUKET: The Governor of Phuket Phuket has called an emergency meeting this morning (July 11) in the wake of the devastating tour bus crash on Patong Hill last night that has killed person, a 10-year-old boy. The bus flew into the sidestreet on its side and wiped out power poles and the fronts of houses. Image: Screengrab 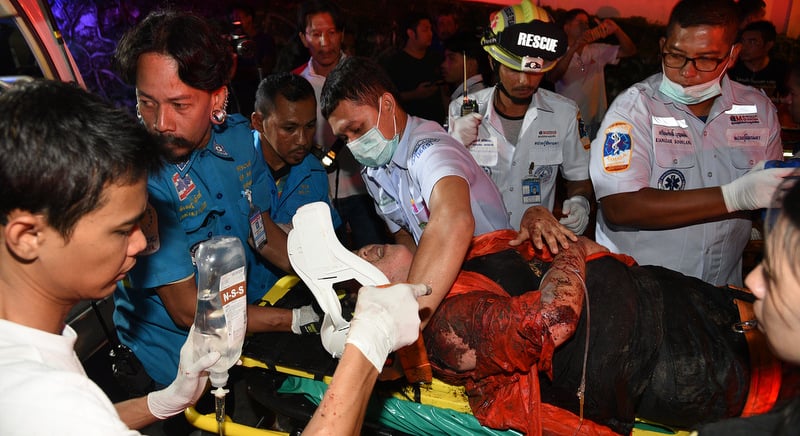 Staff at Patong Hospital early this morning confirmed that the boy, Liu Jierui, was dead on arrival at the hospital.

He had suffered fatal head and chest injuries when the bus flipped onto its side and wiped out power pylons and the fronts of several houses in the small street at the bottom of the hill, just past Patong Temple (Wat Suwan Khiriwong).

He was unconscious and unresponsive when rescue workers pulled him from the wreck.

As of this morning (July 11), staff at the hospital confirmed that Jierui’s father, Liu Fei, 36, had died from head injuries sustained in the crash.

Seven of the other 31 tourists on board suffered serious injuries. Twenty-two tourists escaped with only minor injuries.

Also on the bus, registered in Phang Nga province, were two tour guides, two tour guide leaders, one tour company staffer and the driver, 36-year-old Krittaporn Nualdua, registered as a resident of Rassada in Phuket.

According to the emergency patient notice posted by Patong Hospital staff in the hours immediately after the accident, the injury and fatalities recorded were as follows:

Police reported that the Chinese tourists were being taken back to the Patong Bay Hill Resort when the accident happened at 10:57pm. (See story here.)

The driver, Krittaporn, lost control when the brakes failed at the bend at the bottom of the hill, police noted.

Krittaporn was taken into custody for questioning by police last night as they continue their investigation.

Patong Police Chief Col Tassanai Orarigadech has already vowed legal action against the driver and the tour company involved in the deadly tour bus accident at the same location less than two weeks ago.

In that accident, on June 30, a bus carrying Chinese tourists slammed into a concrete wall built in front of a house to stop runaway vehicles from ploughing into the home.