Yada “Hooto” Sajjakul is one very confident 15-year-old, while many kids her age might shy away from the spotlight, she has taken to national television as a contestant on The Voice Kids and belted out songs in front of millions of people. The Phuket News recently got in touch with Hooto to ask her some questions about her meteoric rise to national attention. 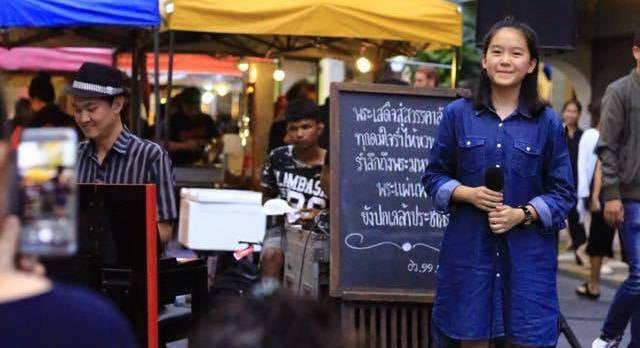 Born and raised in the southern Phuket neighbourhood of Chalong, when Hooto entered school she never thought singing would become so central to her life.

It all began when her Anubarn 3 (Pre-elementary 3) teacher noticed her talent for singing and told her that she had great potential.

She was five and this compliment stuck with her. After years of constant practice her love for singing grew, and four years later she sent in an audition video for Season 1 of The Voice Kids, but sadly, she was not picked.

For many children this would be a heavy blow to their confidence and would make them give up, but not for Hooto.

She wanted to reapply immediately, but due to her educational priorities she delayed doing so until this year. After sending her audition video for the second time she was selected to compete against other young hopefuls from across Thailand.

The Voice Kids is a variation of the popular televised talent competition The Voice, but it features participants under the age of 18 – all hoping to kick-start their singing career.

The premise of the show is that the judges, who sit in large red chairs, face towards the audience and away from the contestants.

This reduces the bias that comes with first impressions and forces their judgements to be solely based on the contestant’s voice.

The theme of the show changes every week and participants are challenged to sing in various styles and genres of music.

Hooto has nothing but a positive take on the show. When asked what is her favourite week or theme of the show was, she says, “I like every week because I’m doing what I love.”

Of the other contestants on the show, Hooto says, “They’re great, we all have the same hobbies and interests because of singing, therefore it’s easier to get along with each other.”

She says the coaches are very supportive and they preach the idea of friendship and working together like a large family.

Consequently, the show has been very welcoming and when asked of bad experiences on the show, Hooto paused before saying, “There’s nothing to say, but there is good in both winning and losing.”

When I asked if she has any parting words for her fan base – to which she humbly says must only be a few people – she replied, “If you love something do it, and don’t wait for that love to fade away because you become brave in the name of love and hence magical things can happen.”

In the final show, that took place a few days after this interview on Sunday June 18, she narrowly missed out on victory, coming in at second place behind 14-year-old Siripong “Nat” Srisa from Udon Thani.

But as she herself said, there’s good in both winning and losing. So let’s hope this is just the start of her long career as a performer. Congratulations Hooto!