Phuket ‘Eco Artist’, Ms Prasopsuk Leadviriyapititwo, or “Pom” as she is known throughout the island’s art and environment circles, is an inspiration to artists and conservationists alike.

environmentnatural-resourcespollution
By The Phuket News 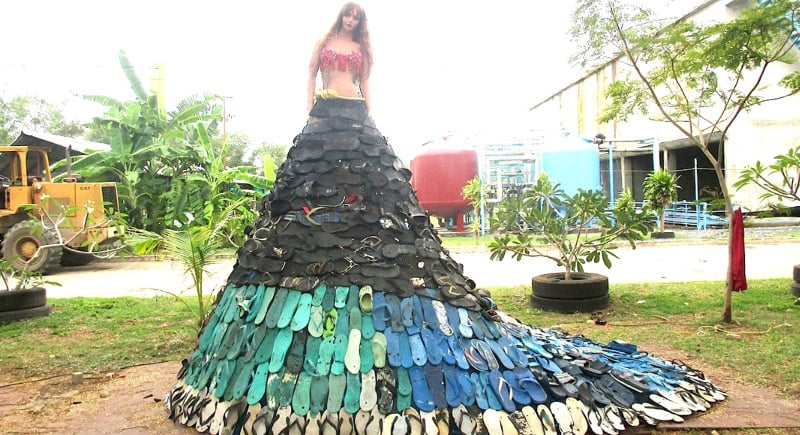 The dress was made from old flip-flops found on Phuket’s beaches. Photo: Prapsuk Leadviriyapititwo A native of Lopburi who has called Phuket home for two decades now, regularly channels her creative juices to design and build fantastic treasures from trash, inspiring the island’s aspiring young artists to take an active role  in conserving the environment, while at the same time expressing themselves and creating proactive messages through art.

Her latest masterpiece, “Flip-flop Princess” is a gigantic mermaid sculpture constructed entirely from rubbish gathered from Phuket’s beaches – mostly discarded flip flops, which were collected during a number of routine beach clean-ups by Thai and international students as well as members of Patong Rotary Club and the various Green Clubs along the west coast.

The sculpture, which took Pom the better part of two and half months to complete, was featured at a private beach festival held earlier this month on Banana Beach of Coral island off Phuket’s south coast. From about 1,000 flip-flops collected, Pom selected and used 800, mostly to form the mermaid’s beautiful dress.

Asked about her inspiration in creating her latest masterpiece, Pom wrote to The Phuket News:

“It’s been 19 years since I’ve taken a keen interest in ‘art and the environment’. Surprisingly, I don’t recall finding any flip-flops on Phuket beaches prior to 1997. But what I noticed following the 2004 tsunami catastrophe was the amount of flip-flops left behind on Phuket beaches, which seem to have increased over time, more and more.

“For me, those flip-flops are similar to a mermaid princess in fairy tales who has taken a long journey from under the ocean before ending up on the coast waiting for someone to find her. As someone who love to do creative art, I felt that all of the flip-flops carry their own unique story.

“At one point in time, they were ‘a new pair on the shelf’ in some shop somewhere in the world. Someone found them, bought them, begun their journey. Now we find them on Phuket’s beach, without an owner, all sizes and all kinds, which come from different places, nationalities and religions, but today, only a part of them remains, as a discarded flip-flop, while its original owner may still rest within the deepest parts of the sea, if not alive somewhere in the world. What matters is that no one really wants them anymore.

“My ‘Flip-flop Princess’ symbolizes a society without bias. The whole model was put together from different pieces of flip-flops from around the world, to form a sculpture. It’s the hope that all people who have taken a journey in the world could join together like those flip-flops to create unity and peace, to be aware of our life, having realized that the past and future are real illusions, that they exist in the present. That is my inspiration from the beginning.”

Pom noted that of all the flip-flops she used, there was only one “perfect pair”.

“It’s amazing that only one perfect pair popped up, so it shows it must have come straight from the shop. That makes me believe it was related to the tsunami, because no one just throws away or forgets a new pair [of flip-flops] on the beach,” she concluded.

The “Flip-flop Princess” is currently in storage and looking for new temporary homes to raise awareness around the island. If you have a space you’d like to host her in, please contact Nick Anthony on 089 873 2042, or email:nick@indigore.com