Australia was the scene for the most appropriate celebrations of the first World Vasectomy Day: live, public snips. 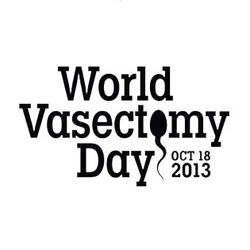 There's actually a clever logo to go along with this.

Chris Wiren was just one of 16 volunteers in Adelaide willing to get a vasectomy in public for the holiday. The father of four was snipped by Dr Doug Stein, a vasectomist who has performed the procedure on over 3,000 men and who is on a crusade to spread the gospel of planned parenthood.

“I just think that people should have only the children that they want because each of us is a fairly significant burden on the planet and a competitor with our fellow species,” Stein said.

Stein was not alone in his attempts, as 184 doctors from across 25 countries signed up to perform 1,000 vasectomies over 24 hours.

“I constructed the idea as a sort of band of brothers, men coming together for serve a greater purpose that they would put their balls on the line for Mother Earth, meaning that we would actually make a sacrifice that women make all the time,”said award-winning director Jonathan Stack, who is behind a documentary covering the procedure and the impact of overpopulation.