BANGKOK: Chinese President Xi Jinping arrived to Thailand to attend the 29th Asia-Pacific Economic Cooperation (Apec) summit on Nov 18-19 and conduct talks with his Thai counterpart Prayut Cha-o-cha. The Tourism Authority of Thailand (TAT) hopes the meeting will promote resumption of Chinese arrivals to the Kingdom, while the Minister of Tourism projects that when this happens, overall arrivals are going to double instantly as China alone will bring as much as all the other source markets combined.

Chinesetourismeconomicspolitics
By The Phuket News 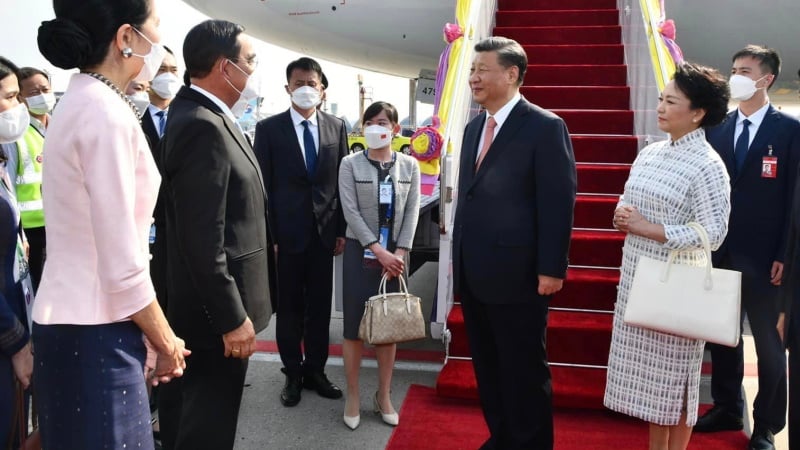 General Prayut Chan-o-cha and General Secretary Xi Jinping at the Apec summit which started in Bangkok on Nov 18. Photo: Ministry of Foreign Affairs of China 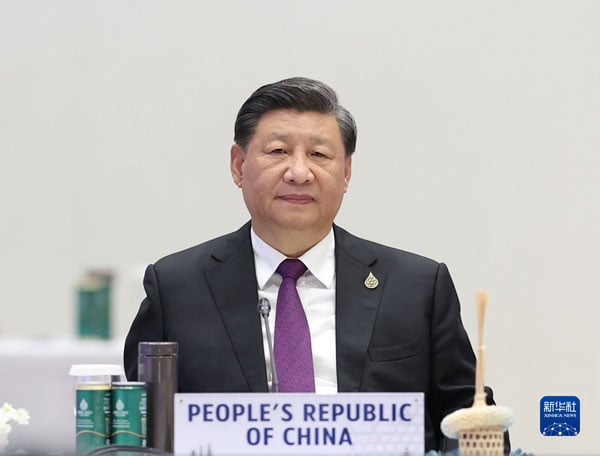 General Secretary Xi Jinping at the Apec summit which started in Bangkok on Nov 18. Photo: Ministry of Foreign Affairs of China A special airplane carrying the General Secretary of the Chinese Communist Party landed at Suvarnabhumi Airport in Bangkok on Thursday (Nov 17), one day ahead of the main events of the Apec summit.

“Honor guards flanked the red carpet. Local youngsters dressed in flamboyant traditional Thai costumes pressed their palms together and performed the Thai greeting. Representatives of overseas Chinese in Thailand waved Chinese and Thai national flags to express their warmest welcome to President Xi and Madame Peng.” the Ministry of the Foreign Affairs of China said, describing the atmosphere at Suvarnabhumi Airport on Nov 17.

“On the way to the hotel where President Xi will stay, his convoy passed by giant LED screens in the color of ’Chinese red’ that read ’Warm welcome to His Excellency Xi Jinping, President of the People’s Republic of China, and his wife, Professor Peng Liyuan’ and ’China and Thailand are a family’ in both Chinese and Thai languages. Everywhere the convoy went, it was greeted with warmth and friendliness,” the ministry added.

The warm welcome is no surprise when one remembers that in 2019, before the COVID-19 pandemic stroke, Chinese citizens accounted for nearly one third of all foreign arrivals to Thailand. During that year, the Kingdom received 11 million Chinese tourists, generating B532 billion from an average expenditure of B6,118 per day, with an average length of stay of 7.8 days.

Ready for the flow

Ahead of Xi’s visit the TAT offices in China had kicked off sales and promotions, gearing up efforts to lure back Chinese tourists as soon as the Chinese leader allows free outbound travel. All five TAT offices on the mainland as well as the ones in Hong Kong and Taiwan had started working on it in advance, said Yuthasak Supasorn, the TAT Governor.

"Whenever China opens, they [tourists] will immediately come to Thailand," assured Mr Yuthaksak, adding that the behaviour of the Chinese vacationers is not season-dependent, and thus Thailand can become their top destination from day 1 of reopening whenever it happens.

"Thailand will be among the first destinations for Chinese tourists," agrees Piti Srisangnam, director for academic affairs at Chulalongkorn University’s Asean Studies Centre.

According to Mr Piti, China can be expected to “ease travel restrictions and reopen further next year”.

Mr Yuthasak most recently also projected Beijing to give the green light for reopening no later than March 2023, when the plenary meetings of the National People’s Congress (NPC) and the Chinese People’s Political Consultative Conference (CPPCC) should conclude.

This optimism is further supported by the most recent easing of travel-related COVID-19 restrictions in China and increase in scheduled flights between Thailand and China in September from seven to 15 flights per week.

If they come it will be double

According to Phiphat Ratchakitprakarn, the Minister of Tourism and Sports, which he leads, had directly asked Prime Minister Prayut to negotiate with Mr Xi on relaxing pandemic border controls and facilitating Chinese nationals traveling abroad, especially from southern provinces. The industry’s focus is now on the outcome of the meeting between General Prayut and General Secretary Xi.

Earlier Minister Phiphat said he believed some 1.5mn Chinese travelers could visit Thailand in December 2022 if Mr Xi allowed outbound tourism to resume after the meeting with General Prayut at the Apec summit in Bangkok.

To put it into perspective, Mr Phiphat further said 1.5mn foreign tourists of all nationalities are expected to visit Thailand every month from October, November and December. Thus Chinese arrivals are hoped to double the overall number for the last month of the year – or any other month when Chinese travelers are finally allowed to leave their country for vacation and return freely.

According to Mr Phiphat, the estimated 1.5mn arrivals (without China) would push the total for the year to more than 10mn. With extra Chinese travelers, total arrivals could reach 12mn.

According to a report by the Global Times, a tabloid controlled by the Chinese Communist Party’s flagship newspaper the People’s Daily, in August the Kingdom of Thailand stood fourth among the most preferred destinations for mainland Chinese, after South Korea, Japan and the USA.

As of Oct 30, tourists from China in Thailand totaled 191,742 due to more trips by students and business visitors, Thanet Phetsuwan, TAT’s deputy governor of marketing for Asia and South Pacific, the TAT said on Nov 2. The monthly average for 2022 thus stands at around 19,174.

Direct Chinese arrivals to Phuket totaled 10,953 for the period from May 1 through Oct 31, giving a monthly average of 1,825 holders of Chinese passports passing through immigration control at Phuket International Airport.

Chinese arrivals to Phuket from Nov 1 to Nov 17 stand at only 826 travelers. For comparison, Russian arrivals for the same period are 31,652 passengers while India provided 15,702.