PHUKET: A 20-strong team of officials carried out a raid on four properties in the Chumchon Sapanruam community in Phuket Town yesterday afternoon (Jan 19), a raid that led to the seizure of 44 kilograms of kratom and the arrest of four people. Officials carry out a raid on one of the properties. Photo: Eakkapop Thongtub. 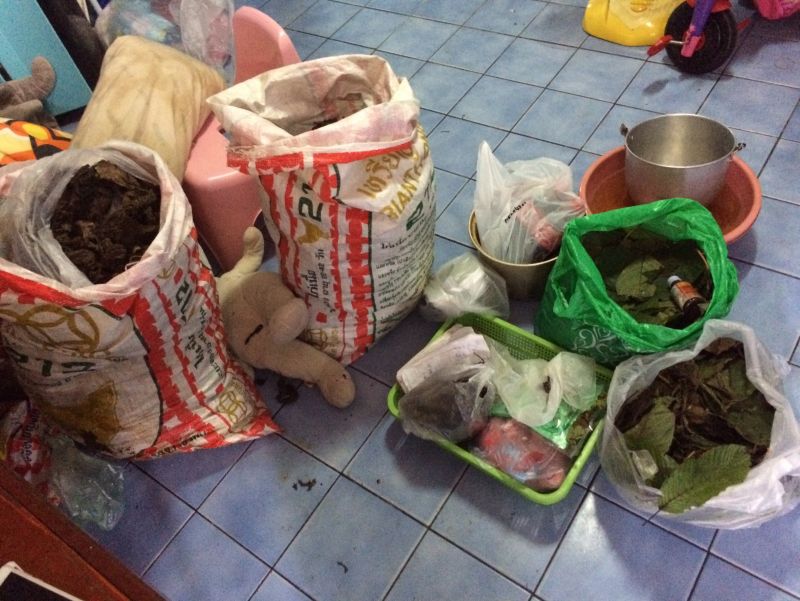 The raid came after local residents complained of continued drug activity being conducted in the area.

Three people were arrested in the raid, however, only one was named by police, 23-year-old Mr Amnart Faijai. The other two arrested were Amnart’s girlfriend and mother.

However, officers confirmed that a fourth person was also found in one house, a 74-year-old woman named only as Ms Jai.

Ms Jai was previously arrested on Nov 21 when she was found to be in possession of 58kg of kratom.

At that time, Ms Jai told officials that she was from Khon Kaen and no income. She said that she and the homeowner knew each other and that she looked after the house when the owner was away.

She admitted that she sometimes helps sell kratom for the owner which she sells for B200 per set (two bundle of leaves and one bottle of cough syrup). (See story here.)

Officers confirmed that on this occasion Ms Jai was not arrested.

As the first raid was going on, a separate team were raiding another two houses in the community, 8/1 Soi Sapanruam 7 and 36 Soi Sapanruam 1.

Nobody was found during the raid on 36 Soi Sapanruam 1, however, officers did discover fresh and liquid kratom.

It was later found that this property was also rented by Amnart arrested in the first raid.

Amnart, his girlfriend and mother and Prapaisri were all taken to Phuket City Police Station to face their charges.

It was also noted that as the raids were being carried out a crowd of local residents told officials that they were unhappy with the ongoing drug problem within the community and that it appeared to be spreading rapidly.

They said that despite officials trying to stop the problem, many outsiders continued to go into the community seeking and using drugs and that they were concerned for the safety of young people in the area.