PHUKET: The Phuket Land of Transport Office (PLTO) with support from Royal Thai Army soldiers on the island have launched a campaign to ensure that drivers of all commercial passenger vehicles in Phuket, including ride-sharing cars, at least have the correct driving licences. A soldier checks a hotel driver’s licence at a checkpoint in Kamala. Photo: PLTO A Phuket taxi driver is pulled over and checked by transport officials. Photo: PLTO 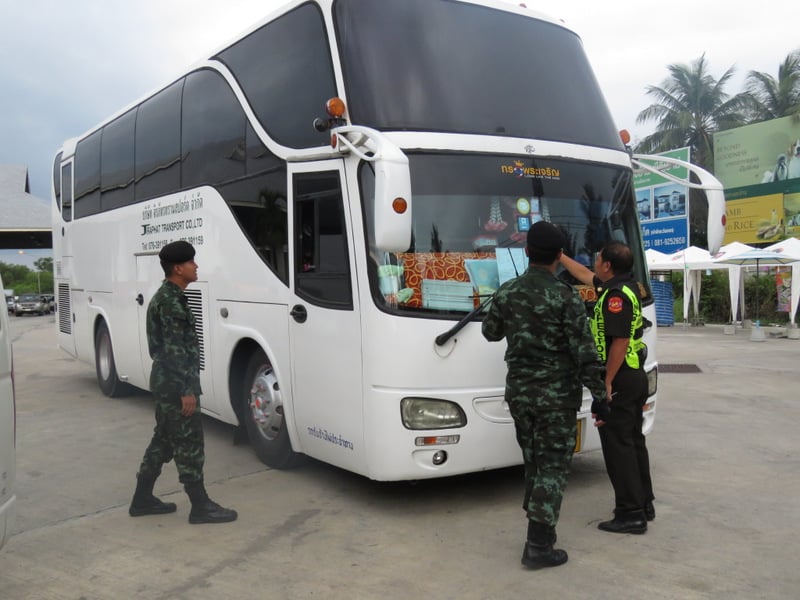 A soldier checks a tuk-tuk driver is legal. Photo: PLTO A soldier joins an inspection of a passenger van. Photo: PLTO A Phuket taxi driver is checked to ensure he is legal. Photo: PLTO The campaign, confirmed PLTO Chief Banyat Kantha on Wednesday (Mar 15), comes only weeks after Mr Banyat arrived in Phuket to take up the post as Phuket’s leading Land Transport official.

Soldiers, police and PLTO staff are already checking drivers passing through checkpoints set up across Phuket, including at Phuket International Airport, the Phuket Checkpoint leading onto the island, as well as in Kamala and elsewhere, in a co-ordinated campaign, Mr Banyat said.

“This crackdown is in conjunction with the one in Bangkok on ride-sharing drivers, and is made possible with extra support from the Maj Gen Pornsak Poonsawat, Deputy Commander of Royal Thai Army Region 4,” Mr Banyat explained.

However, while Bangkok officials are wrapped up in the GrabCar and Uber driver crackdown, Chief Banyat said, “I don’t think GrabTaxi and Uber will be problem in Phuket. Drivers not having public vehicle licenses is more important and what I am focussing on right now.

‘The situation about commercial passenger drivers not having the correct licences is worrying,” he added.

“Gen Pornsak asked which issues needed attention to improve tourism in Phuket, and the PLTO advised that we must do as much as we can with the Royal Thai Army to ensure drivers of public transport vehicles are properly licensed. Hence there is no time limit for this campaign. It will continue as long as necessary,” Mr Banyat explained.

Drivers caught operating a public transport vehicle without the correct licence will be banned from driving such vehicles immediately.

“They will be fined about B2,000 to B5,000, depending on the type of vehicle, and they will be arranged to take the correct test as soon as possible,” Mr Banyat said.

“A further 35 other drivers had their public vehicle licenses renewed,” he said.

But of the 195 new applicants, “only 60 people joined the lessons – and of those only 39 passed the tests and were actually issued new licenses,” he noted.

The campaign will soon ratchet up a notch to also target uniforms, Mr Banyat warned.

“From April 1, public drivers will be checked to ensure they wear appropriate uniforms, because tourists who just arrive at Phuket International Airport would expect to see a trustworthy uniform. Public uniforms will reflect the tourism industry in Phuket,” he explained.

“As such, public drivers must wear collared shirts and plain long pants with no pattern at all, as well as proper shoes and a name tag.

“If they do not comply, they will be fined up to B1,000 every time they are caught. They have until April 1 to sort this out. In the meantime we are letting them know this requirement is coming,” he said.