BANGKOK: Confrontation between anti-government protesters and opponents who constantly warn them to stop dragging the high institution into their activism is feared as both sides plan rallies outside parliament this morning. 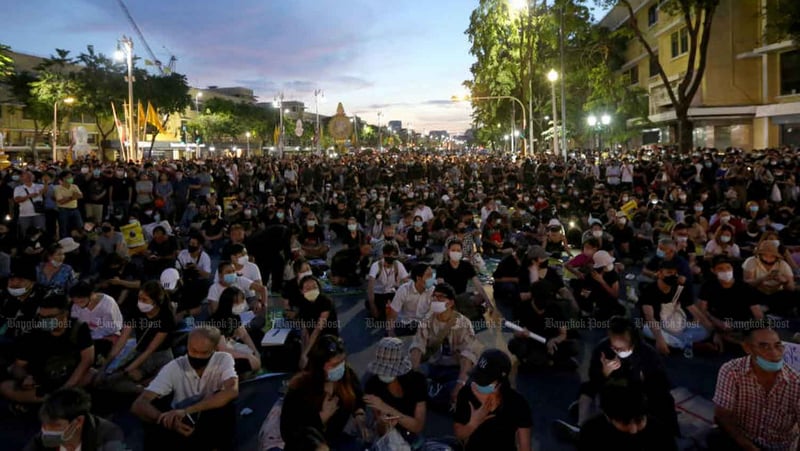 The anti-government movement is led by the Free People and the Student Union of Thailand, while the royalist movement is headed by the Archeewa Chuay Chart (Vocational Students Helping the Nation) group and another group calling itself the Association of Students of Thailand.

The two sides have both announced their plans to rally outside parliament at 10am today (Aug 10), reports the Bangkok Post.

The anti-government side is demanding the government stop threatening people who come out to exercise their democratic rights and freedom.

The group has criticised injustice and disparities in society, urged a rewrite of the constitution and House dissolution.

The other side, meanwhile, accuses the first side of having a hidden agenda, which targets the high institution, and warning anti-government protesters to stick to their claimed goal of finding a way out of the country’s “political crisis”.

The anti-government side has asked its supporters to rally outside parliament the morning before they gather again at Thammasat University’s Rangsit campus at 5pm when thousands of people, mostly university students, are expected.

Lt Gen Nuntdach Makswat, a former executive of Action Coalition for Thailand and former supporter of the now-defunct People’s Democratic Reform Committee (PDRC), on Sunday claimed on Facebook that the royalist side had announced today’s peaceful rally before the other side did.

“We plan to simply read our statement, sing the national anthem and the royal anthem, and disperse peacefully,” he said.

“But the other group with conflicting beliefs later announced they would gather at the same place, apparently with the intent to pick a fight.”

He said he had resigned from the party and now acts on his own in this movement.

Panatsaya Sitthichirawatthanakun, a leader of the university students planning to gather at Thamamsat this evening, said she expects between 5,000 and 10,000 to converge. The purpose of the gathering is to oust the government, she said.

Jatuporn Prompan, chairman of the United Front for Democracy against Dictatorship (UDD), meanwhile, warned the government that any unreasonable delay of the charter rewrite coupled with worsening economic hardship may lead to a crisis.

“If they aim to actually start out in November [date of the next parliamentary election], that will in reality become a countdown to Thailand’s next disaster as anti-government protests already look set to escalate from Aug 16 onwards,” he said.

The anti-government movements have announced they will carry out a major rally on Aug 16.

Human rights lawyer Arnon Nampa, who was released on bail in a sedition case brought against him in connection with a July 18 anti-government gathering at the Democracy Monument, has vowed the Aug 16 rally will be at full steam no matter what will happen.

He on Sunday reiterated his determination to fight on even if that means he will end up in jail again and urged the anti-government movement’s supporters to turn up at the Aug 16 rally on Ratchadamnoen Avenue.

He was arrested on Friday along with Panupong Chadnok, known as “Mike Rayong”, one of the young people who held posters denouncing Gen Prayut when the prime minister visited his hometown of Rayong.

Mr Arnon, who has represented several pro-democracy activists in the past, earlier created a stir when he gave a speech at a rally near the Democracy Monument on Aug 3.

In the speech, he touched on the relationship between the monarchy and the constitution.

While anti-government rallies took place in Chiang Mai, Nakhon Ratchasima and Maha Sarakham on Sunday, the Student Union of Thailand posted on Facebook that three protest leaders in Phitsanulok had been missing since Sunday at noon.

They were believed to have been in border patrol police custody in the province to prevent Sunday’s rally from succeeding.

However, Move Forward MP of Phitsanulok Padipat Santipada said the 31st Company, the Border Patrol Police’s unit in the province, told him there had been no arrests of the student leaders.