PHUKET: Officers at the Khao Lampi – Hat Thai Mueang National Park in Phang Nga, north of Phuket, will be on watch this weekend as the 85 turtle eggs taken into care in November are expected to hatch today or tomorrow (Jan 18-19). 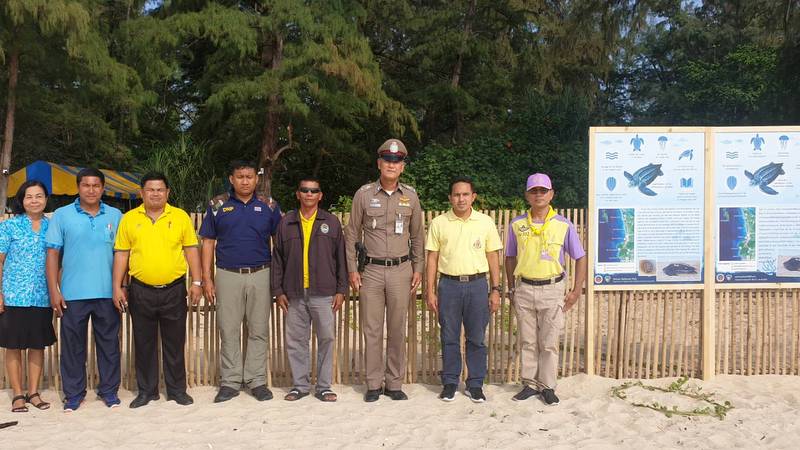 The eggs are from a nest of 104 eggs laid in a nest on Thai Mueang Beach on Nov 17 by a turtle some 194 centimeters in length and 173 centimeters wide, and weighing about 200 kilograms, and estimated to be more than 25 years old. (See story here.)

Of the 104 eggs, 19 were infertile, with the rest moved to a new nest dug by park officials on the beach in front of the national park office so officers could keep an eye on them.

A series of CCTV cameras were installed, with the cameras broadcasting online 24 hours a day, to prevent people from stealing the turtle eggs or disturbing the nest in any other way. (See story here.)

Six cameras have been installed. Live footage can be viewed at http://loveseaturtle.dmcr.go.th/

After the eggs had incubated for 59 days, officers began raising the nest temperature to help encourage the eggs to hatch, explained Park Chief Haritchai Rittichuay.

Turtle eggs usually hatch between 55 and 60 days, he said.

“It is likely they will hatch this weekend. Our officers are ready to look over them and we have already removed a section of the fence so they can find their way to the sea easily,” Mr Haritchai said.

People watching online will be seen the turtle hatch and make their way into the sea, he added.

Meanwhile the second nest of turtle eggs laid by a turtle on Bor Dan Beach in Thai Muang on Nov 27 are expected to hatch in about seven to 11 days time, Mr Haritchai said.

The park officers have even more turtle eggs to care for after a new nest was found on Bor Dan Beach, about 300 metres north from the where the eggs laid on Nov 27, on Tuesday (Jan 14).

Officers from the Department of Marine and Coastal Resources (DMCR) conducting a “turtle patrol” found tracks in the sand indicating that the turtle that laid the eggs measured some 180cm from the front left to right flippers and 80cm wide across its shell.

Buried in a nest some 80cm deep were 62 eggs in total. However, only 22 of the eggs can produce hatchlings, the remaining 40 were infertile, the officers reported.

The eggs was moved to what is now called the “Leatherback Turtle Surveillance and Monitoring Center” further down the beach.

Leatherback turtles have not been seen laying eggs on beaches in the national park, which stretches from Nai Yang all the way north to Sai Kaew Beach on the northwest tip of the island – and including Nai Thon and Mai Khao Beach – since January 2013.

The leatherback laid 111 eggs at the popular tourist beach on Jan 10.

“In total, 92 of them were good, the other 19 were infertile,” explained Prarop Plangngarn, Chief of the Phuket Marine National Park Operations Center 2.

The eggs were moved to an area on Nai Yang Beach inside the national park so officers can keep close watch on them. (See story here.)

The turtle patrols did not start immediately on Jan 10, however, as Mr Prarop explained, “Turtles that lay eggs usually do not come back until about eight to 15 days later.”

Mr Prarop added, “I consulted with other experts, and considering the current weather and tidal conditions, we believe the turtle may return sometime from Jan 18 to 25.”

“It is possible that other turtles will come to lay eggs on a Phuket beach. That’s why we are starting our patrols, which cover Nai Thon, Nai Yang, Layan, Sai Kaew and Mai Khao, a total distance of about 13.7 kilometers,” he said.

A group of volunteers have joined the efforts, conducting a cleanup of the beach area, and park officers have posted a small educational exhibition at the site to teach people the basics of sea turtle habits and lifecycles.

“If we find a nest, we will move the eggs to safe place or leave eggs there with officials. We want these eggs to be protect,” Mr Prarop said.

Sirinath Park Chief Natthawat Nuisriram told The Phuket News that the 92 eggs from Jan 10 laying are now under 24-hour surveillance by officers and three CCTV cameras that have been installed to monitor the site, beside the main national park office on Nai Yang Beach.

The eggs are not expected to hatch until early March, Mr Natthawat said.

“We have posted a fence around the new nest site, and we are working with national park officers from Nakhon Sri Thammarat. These officers monitor the temperature inside the nest and will monitor the eggs hatching,” he said.

Mr Natthawat urged people to report any turtle eggs and nests they find on the beach.

A B20,000 reward, launched in November, is offered to anyone who first reports a turtle nest. (See story here.)

The reward initially applied to only certain beaches in Phuket and Phang Nga that are known to be preferred locations for turtles to lay eggs, but since the leatherback turtle laid oeggs on nai Thon Beach on Jan 10, the reward now apply for other local beaches, Mr Prarop confirmed. (See story here.)

A B100,000 reward is still on offer to anyone who provides information that leads to the arrests to the person or person who are believed to have stolen turtle eggs from a nest on Thai Muang Beach, north of Phuket, on Jan 4. (See story here.)