I noticed a few photos appearing of a new temple under construction last year on the hillside above Patong Beach and had also seen the access road to this new temple being built next to the Chinese Shrine on top of Patong Hill. 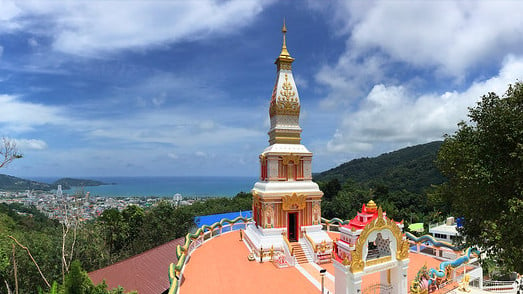 A naga snaking around the temple. The temple building is bright and colourful as it’s relatively new. 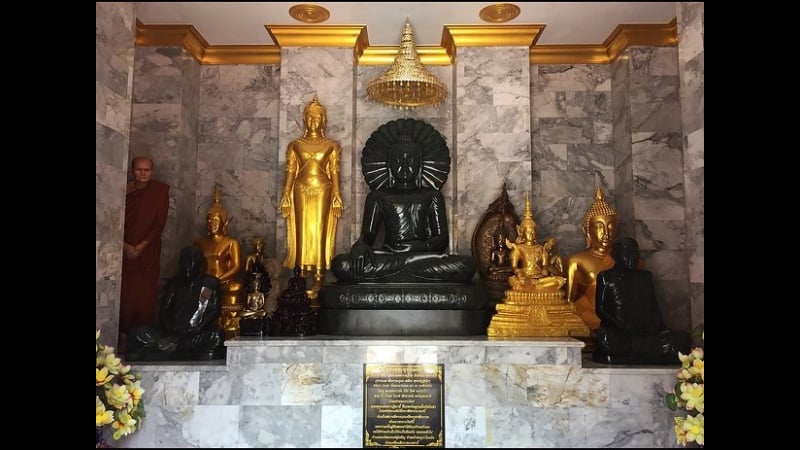 I followed that road many years ago when it was a small track, look­ing for views over Kathu or Patong. I’d not heard any official announcements about the opening of this temple, but I did see some signs up and lots of cars around the entrance to the access road last year, so on a recent sunny Sunday it was time to have a look…

The road to reach Doi Thepnimit temple starts right next to the shrine on top of Patong Hill, between Patong and Phuket Town, the shrine where some people beep for good luck (style of beep­ing and number of beeps is up to you; I have a habit of four short beeps heading towards Patong and two short beeps heading home). It’s easier to turn left into this small side road if coming from Kathu (towards Patong) otherwise you’ll be turning right across the traffic.

The road is concrete and very steep in places. The temple is about 100 metres/330 foot higher than the road. It’s about a kilometre along this road and there are some views on the way looking through the trees across the hills and the Kathu area. Just before the temple there’s a right turn next to a golden Buddha statue and you drop down a little to reach the temple. There you get the best view. Quite impressive! And it was very quiet. There were just a few visitors when I arrived. I took a few photos from above and then drove down to park under a tree outside the temple.

The one temple building is a large chedi, not as huge as the chedi at Wat Chalong, but impressive and very bright and colourful as it’s relatively new. The entrance is guarded by two yaks (mythical giants, often seen at temples) and also by two nagas (seven-headed mythical snakes). Buddhist stories tell of the king of the naga sheltering Bud­dha from a storm by covering him with his seven heads, so you see the naga in pretty much all Buddhist temples too.

The two nagas at this temple are very large. The heads are at the front of the temple and the bodies undulate around both sides of the chedi and meet at the back where their tails entwine. The two snakes are each about 40m long. It’s an impressive piece of artwork.

If you want to step inside, shoes off please. I had a quick look inside the chedi. There were two people in silent prayer just inside so I switched my phone to silent mode before snapping a photo. Very glad to have made the ef­fort to visit.