THAILAND: CU-Cov19 - a novel coronavirus vaccine being developed by a Thai research team in collaboration with the University of Pennsylvania - is expected to enter mass production by the end of the third quarter next year, the research team said yesterday (July 12). 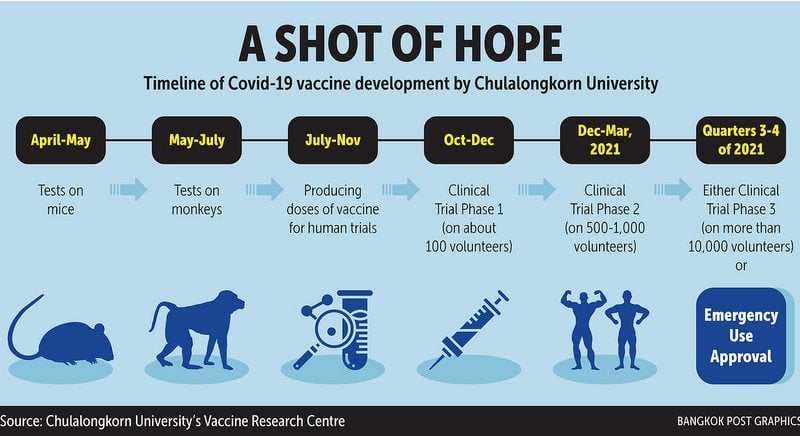 Non-human primates which received a second dose of the vaccine displayed high levels of COVID-19 antibodies, which the research team called an encouraging sign in light of the upcoming human trials scheduled in October, the team said.

The research team - led by Kiat Ruxrungtham of the Chula Vaccine Research Centre - made the remark at a press conference charting progress in their work. The team has been testing Cu-Cov19, an mRNA vaccine, on 13 macaques at Chulalongkorn University’s National Primate Research Centre in Saraburi.

The result has led to high hopes that the country can successfully produce its own vaccine against COVID-19 by the third quarter of next year. BioNet Asia, the centre’s partner, is expected to produce “millions” of doses by the end of next year, said Dr Kiat.

Chutitorn Ketloy, a research team member, said macaques which were vaccinated between May and June seem to have developed immunity against COVID-19, with their antibody levels reaching up to 5,120 after receiving the second dose.

Mice injected with the vaccine registered antibody levels of up to 40,960, suggesting that the vaccine’s effect decreases as the size of the test subject increases, the researcher added.

“This is a significant result, as we now understand that the antibody response will drop by 5-10 times when the vaccine is administered on humans,” said Dr Kiat.

“But even with such a decrease, immunity to the disease can be achieved as long as the antibody response measures above 1,000, which is the level we hope to see in the [human] trial.”

According to him, the first phase of human trials is going to begin in October, followed by the second phase from December to March 2021. As the third phase of human trials requires over 10,000 participants for the results to be valid, Thailand - due to its relatively low number of cases - will seek the cooperation of Brazil, India and Indonesia to carry out the tests.

“However, the third phase can be skipped altogether if the United States’ Food and Drugs Administration (FDA) approves another mRNA vaccine for COVID-19 before ours,” said Dr Kiat.

He said the US FDA could exercise its Emergency Use Authorisation rule to produce vaccines in Thailand under the regulation and supervision of Thailand’s FDA.

If the US FDA approves a vaccine before Thailand, Thai plants can mass-produce the vaccines by the third quarter of next year, he said.

To effectively control an outbreak, at least half of an entire country’s population will need to be vaccinated, which means Thailand will need at least 70 million doses.

If local plants are not able to churn out enough vaccines to cover the demand, the government will seek Indonesia’s cooperation to help co-produce the vaccine, said Dr Kiat.

It is estimated that around two billion doses of COVID-19 vaccine will be produced by the end of next year - which is unlikely to be enough to meet the global demand.

“In 2009, Thailand failed to secure swine flu vaccine in time due to the drug’s limited production run, even though it was paid for in advance. The vaccine arrived when the crisis was already over,” Dr Kiat said.