There are children everywhere. “It’s infested with children, do we really have to watch this movie?” asks my girlfriend, while I’m jumping up and down with the group of children beside. And I'm a man with a beard.“It’s a children’s movie,” she protests. 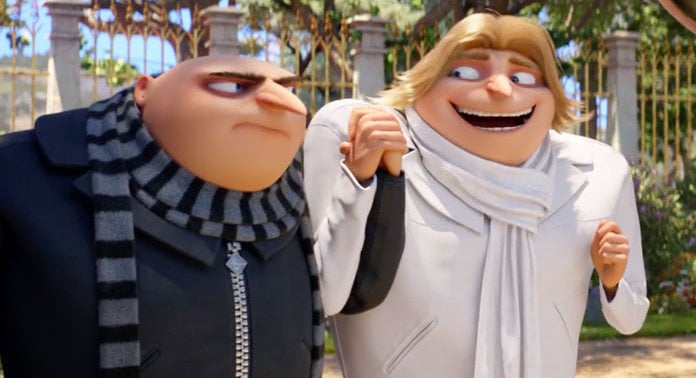 A gasp comes from the excited, parents who were wrangling their children waiting to buy tickets. They closed their ears and whistled over in hopes of dismissing the blasphemy that now poisons their ears.

Children’s movie? She couldn’t have been more wrong.

Despicable Me 3 is a continuation of the hugely popular Despicable Me franchise from Universal Pictures and Illumination Entertainment.

The animated action-adventure, co-directed by Kyle Balda, Pierre Coffin and Eric Guillon, is centred on the incorrigible Gru (voiced by Steve Carell) and his family (You’ll have to watch the previous ones to get all the ‘family’ back story).

Gru is in the process of a mid-life career change from “the worst super-villain to the worst secret spy”, all the while attempting to catch his nemesis and self-proclaimed “best villain that has ever lived” Balthazar Bratt (voiced by South Park’s Trey Parker) and it’s a bash.

The first Despicable Me, released in July 2010, and its sequel released on June 2013, spun off the wildly popular “Minions” franchise, so fans have been waiting almost four years for the conclusion of the trilogy.

The filmmakers have kept true to the successful formula of the first two films and the movie is action-packed right from the start, bombarding us with 80’s dance moves and even resurrecting the “King of Pop” for a dance battle.

The heroes (or is it anti-heroes) Gru and his wife Lucy (Kristen Wiig) pursue the notorious Balthazar Bratt through a breathless sequence of flying boats made from bubble gum, Tron-like racing bikes from the AVL (Anti-Villain League), all with the help of their dedicated minions. All this in just the opening ten minutes.

Gru and Lucy’s three adopted daughters Margo (Miranda Cosgrove), Edith (Dana Gaier) and Agnes (Nev Scharrel) were a great addition to the cast of characters and were developed well – their motivations and actions feel real throughout the film.

Agnes’ enduring love for unicorns will turn anyone’s frown upside down, whenever she is on the screen she captivates the audiences attention – even drawing out synchronized “Awwws” and “Ahhhs” from the entire audience in one scene.

We are also introduced to Dru (also voiced by the talented Steve Carell) who turns out to be Gru’s long-lost twin brother – but nevertheless their personalities are polar opposites.

Their dynamic was great and interesting to watch, with each their own goals and problems. Gru struggles to give up his penchant for villainy, whilst Dru is drawn to the despicable lifestyle of the super-villain.

Gru’s bright bald head is contrasted with Dru’s angelic, coiffed hair and it’s like watching two grown ups who never grew up, as they try to grow up and the meaning of family is pushed to its limits.

It’s what happens after a fight, instead of the fight itself that determines their relationship, and that is highlighted when Gru and Dru chase after the evil Bratt who kidnaps the children.

The narrative themes of the movie are quite touching and include the travails of fatherhood, such as having to tell your young daughter that unicorns aren’t real, as well as touching on difficulties facing adopted children and their families.

But its message is overall an uplifting one of persevering in the face of adversity, sticking to your morals and doing the right thing. All of these themes are treated in a way that is satisfying for children and parents alike – it delivers the whole package.

I approached Despicable Me 3 as light popcorn fair, and certainly not expecting to be moved and regularly laughing out loud. Both parents and children will enjoy this cinematic romp, its a veritable roller-coaster ride of emotional turmoil and comedic gold. Take the whole family.