When it comes to great horror directors, we always tend to think of masters like John Carpenter, James Wan or Wes Cra­ven. Is it time, though, to start thinking about adding French director Alexandre Aja to that list? As if movies like The Hills Have Eyes and Mirrors weren’t impressive enough, his brand-new film Crawl has some critics calling him one of the best next generation genre directors. 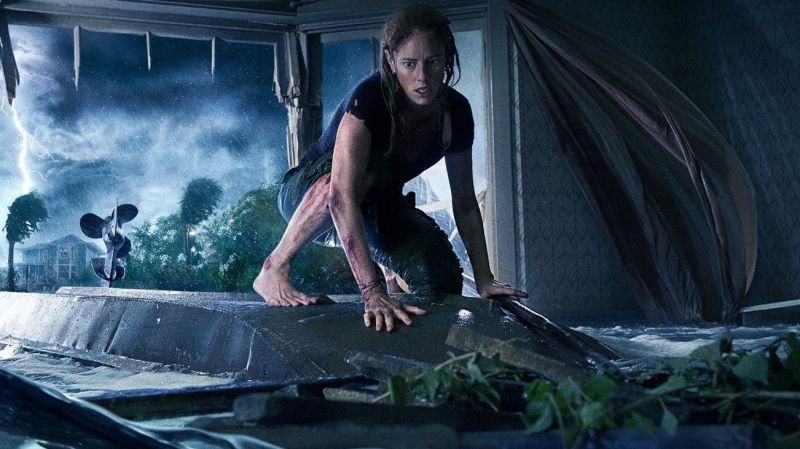 Crawl tells a basic but very believable tale. A hurri­cane is battering the Florida coastline, and while most people are leaving the area, young collegiate swimmer Haley (Kaya Scodelario) finds herself driving into the danger zone after a pan­icked phone call from her sister, Beth (Morfydd Clark). Beth is concerned that she hasn’t heard from their father, Dave (Barry Pepper), who is right in the mid­dle of where the hurricane is predicted to make landfall.

Despite the dangerous conditions, Haley drives to her father’s home and arrives to some baffling circumstances. His truck is in the yard, his dog is in­side and so is his nearly flat phone, but he is nowhere to be seen. When she eventually finds him, injured in a flood­ing basement, she becomes trapped by circling alligators who have also found their way into the basement.

While Crawl may lack some of the horror tropes that fans have come to know and love from films like Saw or even The Conjuring, Aja creates horror from the suspense of characters being placed in a situation that you could eas­ily imagine happening in real life. Add that to the fact that is very much a crea­ture feature horror that involves one of the most terrifying and vicious animals that walks the Earth and you end up with a film that’s touching on a lot of people’s worst possible nightmare.

The big key to making this work is the claustrophobic suspense that Aja is able to create with the setting of the basement. Even before the introduction of the alligators, Aja has the audience jumping as trees crash through windows and then uses the dark, damp basement to its full advantage. Simple things like Haley crawling through the mud on the basement floor, barely able to move in the confined space, adds to the suspense, but things really move into top gear once it’s established that both she and her father and sharing the basement with fully-grown alligators who are out for a meal. From then on in, whenever one of the characters moves in the basement, everything is heightened. You’re never really sure just how many alligators are coming and going from the basement and where they are hiding.

For all of the great moments of sus­pense the film does have, there are also some glaring errors that at times grate on its audiences. It feels like neither Aja nor his screenwriters knew how to re­ally use some of the characters in the film. Beth is not used after her initial phone calls, and the introduction of police officers and petty thieves in the space around the house seems to only occur in order for there to be a little bit of blood and gore as the alligators feed. There’s no character development for any of those characters and they are massively underused in the grand scheme of things.

Perhaps one of the biggest sur­prises, though, is some of the B- or even C-grade CGI that creeps into the film from time to time. The film goes from having some really realistic and menacing alligators to rain effects so bad that even the team that created Sharknado would have rejected them. It may seem like a small criticism but so bad is the effect that at times it takes the audience right out of the real­ism created during the film.

On the flipside, the filmmakers did get the casting right. While hardly a big Hollywood name, Kaya Scodelario showed with The Maze Runner fran­chise that she is a star on the rise and she furthers enhances that title here in a role that would have been at times hell to have filmed. Countless days in a water tank plus a fair amount of gore effects would take its toll on any actor, but Scodelario and Pepper persevere through the trials of the occupation in order to create truly memorable horror performances and are a dynamic on-screen pair.

Crawl is a film that does have its weaknesses but for the most part is the type of horror film that has you on the edge of your seat throughout. And when you close your eyes that night, expect a few nightmares about alligators coming to get you…