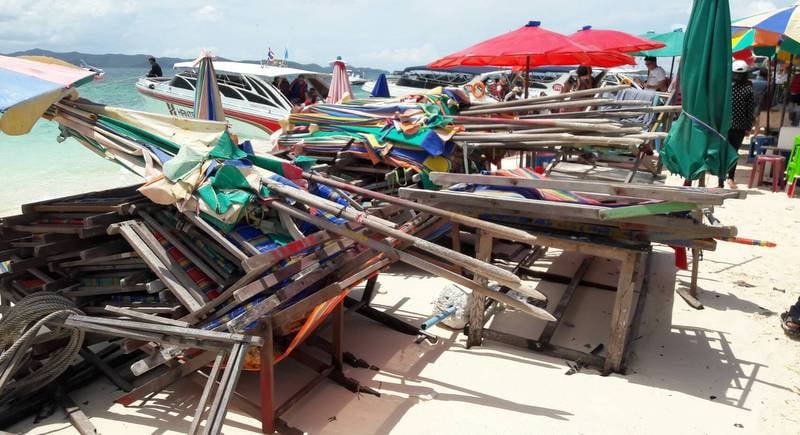 They have also ordered the removal of facilities and structures used for tourist activities from all three islands: Koh Khai Nok, Koh Khai Nui and Koh Khai Nai, all located a handful of kilometres from Phuket.

Department of Marine and Coastal Resources (DMCR) regional chief Watcharin Na Thalang informed Phang Nga and Phuket tour operators and guides of the ban, issued last Thursday (May 19), at a meeting yesterday (May 24).

“We want operators and guides active in Phang Nga and the surrounding areas to understand the rules and procedures in conducting a tour to prevent further damages to our marine natural resources and the coastal area. They must practice environmentally friendly tourism,” Mr Watcharin said.

At least 60 speedboats per day, as well as increasing numbers of restaurants and shops, are diminishing existing natural resources in the coastal areas around the three islands, said a recent report by the Phuket Marine Biology Centre, Mr Watcharin pointed out.

“Coral reefs are crucial to marine ecosystems and our last survey showed the area around Koh Khai Nai has corals covering 120 rai, Koh Khai Nok has 109 rai and Koh Khai Nui 17 rai. Today, a tremendous amount of corals have been damaged and getting them to recover is very difficult,” he said.

“The reasons for coral damage in the Koh Khai area is from the coral-bleaching process, which occurs naturally and from human activity. This includes the increasing number of tourists, boats that anchor on the corals, people walking on corals while playing in the water, feeding marine animals and catching them to take photos of with them.

“All these activities negatively impact the marine ecosystem and cause a deterioration in natural resources. They must be stopped. We have discovered that about 80 per cent of the coral reefs in the area have suffered damage,” Mr Watcharin said.

Suchart Rattanareangsri, Director of the DMCR’s Conservation division, added, “We started frequent inspections of the area in March, and today we still see tourists feeding fishes and collecting corals from the reefs.

“However, the number of boats anchoring on the reefs has decreased. Most tour boats follow instructions and drop tourists off in the designated areas.”

Regarding the beach clean-ups in the area, Mr Suchart said, “Officials are clearing all beach umbrellas and beach chairs in the area. Shops and restaurants on the Koh Khai islands will be removed and the Royal Forest Department has been contacted to carry out the removal of these structures.”

The officials are determined to maintain these regulations by informing all involved parties of the ban, Mr Suchart said.

“Tour operators and guides will follow the rules and regulations laid out. Officials will post the order in Thai, Chinese, English, Russian and other languages and tourism business and tourists must obey,” he warned.

“We will set routes where tour boats may enter and depart from these areas, and where they cannot enter. Officials will also install more mooring buoys in the area, so far we have added 40.

“We will propose to the local government to send more officials to monitor the tour operators and tourists in these areas to prevent them from engaging in any activities that will damage the coral-reef ecosystems,” he added.