We know humanity is doomed when we can no longer beat our robot overlords at rock, paper, scissors, but maybe you don’t realise just how doomed we were, until you read the following: 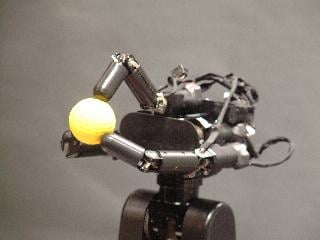 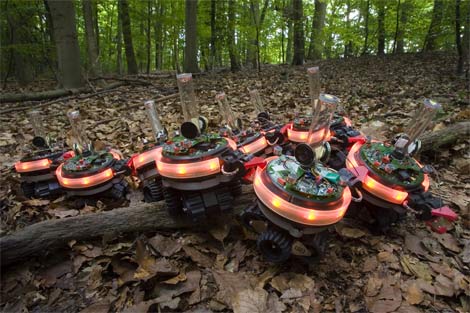 ■ Global swarming: Swarm-bots – you really don’t need to know anything else to judge that these robots are pure evil. After all, at no point ever has the word ‘swarm’ been used to describe something pleasant – there’s no such thing as a ‘swarm of fluffy bunny rabbits’, and you’re not going to lie on the beach drinking a ‘swarm of rum-filled coconuts’.

No, it’s always something that wants to sting you, kill you, and lay eggs in your still-screaming corpse. Swarm-bots are no exception. Built by Intelligent Design Systems, these systems are not so intelligently designed, so much so that we’re not even sure what the exact point of these demon-machines actually is.

The only clue comes from a promotional video where the bots are seen ganging up on, and then dragging away a terrified child, presumably to break her down into base elements and create more swarm-bots.

■ Rubble trouble: Researchers at Japan’s Tohoku University obviously haven’t done their horror movie research, and have gone and built a robot designed after a millipede. That’s not ‘beginning with good intentions and accidentally unleashing a horror’, that’s starting right off at creepy then turning directly onto the Terror Tollway.

Taking the most horrific elements of giant snakes, deep sea creatures, and spiders, the Millipede Bot (or Active Scope System, but we’ll ignore that name) has a camera built into the head, and is meant to snake its way through rubble left behind by earthquakes to locate trapped survivors.

Which is kind of contradictory, seeing as the first thing they tell you, should you ever find yourself trapped in an enclosed space, is not to panic – this mutated robotic devil-serpent smells fear...

■ Distribution channels: There’s something a little creepy about the first time you see the Distributed Flight Array (DFA), designed by ETH Zurich’s Institute for Dynamics Systems and Control, in action. But rather than slapping you in the face with its robo-copter arms, the true terror on display here is more of a creeping thing.

It comes on when you realise that the robots grow stronger, faster, more agile and more stable as they connect together. Alone, they are little more than discs with helicopter rotors contained inside, and one solo flight platform is shaky and slow.

But the DFA is able to join up with others, and others, and on and on to infinity; there is literally no limit to how many of these robots can band together into a vast flying blanket of cold, unflinching, mechanical evil.

■ Finger food: If there’s one thing Ishikawa Hashimoto Laboratory’s Multi-fingered Robot Hands like, it’s balls. Put your balls of any shape or colour near the machine, and it lights up like a robotic kid on Christmas day.

But when you slow the footage down, you realise that even if the Harlem Globetrotters were right, and the fate of humanity does come down to a basketball game, the robots will still have the upper hand(s).

Because from dribbling a ball to idly spinning a pen, this multi-fingered robot hand gives its proverbial middle finger to all of humanities most pedestrian tasks.

■ Creeps on call: The Telenoid R1 Telepresence Robot is supposedly designed to help busy families visit their elderly parents in a more personal way – by mimicking their body language and facial expressions during phone calls.

When not in use, it basically just sits there, totally inert... until the phone rings and it summons all the fiery wrath of Satan. When that happens, the robot abruptly opens its mouth, gasps, and snaps into life, staring at you expectantly with it’s non-face and black eyes. That’s how you answer a call.

Or to be more precise, that’s how you receive a call. How you answer a call will probably be with endless, frantic screaming about this possessed machine that has taken over your home.