It's a source of Balkan rivalry but one ubiquitous smell: the wood-fire roasting of peppers wafting through towns and villages each autumn as families prepare the region's best-loved relish. Making ajvar begins with this juicy fruit, which is roasted and peeled, minced or chopped and simmered with sunflower oil. Photo: AFP Slathered on bread, nibbled with cheese or served alongside meat dishes, 'ajvar' has for generations filled the shelves of winter pantries. Photo: AFP 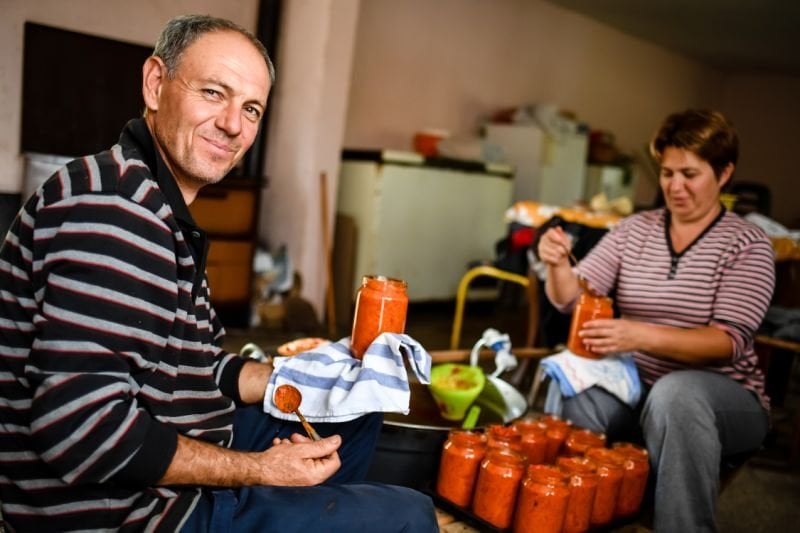 'We consider our product to be the best,' the 65-year-old said proudly, over a grill of blackened peppers in his central village of Ljetovik. Photo: AFP

Slathered on bread, nibbled with cheese or served alongside meat dishes, "ajvar" has for generations filled the shelves of winter pantries -- and the rich spread's production is a matter of no little pride.

"We women all exchange recipes, but everyone thinks theirs is the best," said Vesna Arifovic, 44, in Belgrade's Zeleni Venac market, where she sells hundreds of kilogrammes of seasonal red peppers each day.

Making ajvar (pronounced "eye-var") begins with this juicy fruit, which is roasted and peeled, minced or chopped and simmered with sunflower oil, giving the relish its deep rusty colour.

Flavours diverge across the former Yugoslavia: while Macedonians add aubergine to their much-loved ajvar mix, many Serbian devotees stick to salt, sugar and vinegar.

"There are two kinds of people, the ones who tasted ajvar and the ones who haven't been to Serbia yet," declared Serbia's tourist board on Twitter in September.

Bosnian producer Ivo Lukenda -- whose recipe includes all of the above, plus garlic -- believes his country's ajvar is superior.

"We consider our product to be the best," the 65-year-old said proudly, over a grill of blackened peppers in his central village of Ljetovik.

Ajvar creation is a labour-intensive rite performed with gusto in kitchens and yards as the leaves begin to turn, although some is now mass-produced throughout the year.

Neighbours gather for a tipple of homemade rakija (fruit brandy) before the painstaking task of peeling peppers begins.

"It seems to me that ajvar and peppers bring people together... this red colour seems to make them happier," said Stevica Markovic in his village near the town of Leskovac, a southern Serbian area famed for its peppers.

He and his wife Suncica sit on low stools by a vat of the warm orange mush, filling and briskly stirring dozens of glass jars.

"What makes Leskovac's ajvar stand out is the raw material, the pepper that grows in the Leskovac basin. We have 280 sunny days a year, very good land and enough water," said the 44-year-old, who heads a local association of ajvar producers.

Homemade Leskovac Ajvar and Macedonian Ajvar are both now registered with the World Intellectual Property Organization in order to protect their brand names.

A Slovenian company's bid to patent ajvar in the 1990s sparked outrage in the Balkans, according to media reports.

Love of the relish stretches southwest to coastal Montenegro, while the Croatian company Podravka is among the best-known mass manufacturers.

"The truth is that all the big noise about ajvar started with the idea of food branding" in the former Yugoslavia, said Tamara Ognjevic, a specialist in gastronomic heritage and director of the cultural Artis Center in Belgrade.

What was once the preserve of households "became interesting to the food industry... and everybody -- Macedonians, Bulgarians, Serbs, even Slovenians -- in one moment started claiming it was theirs".

Ognjevic said that a form of vegetable relish most likely came to the Balkans with the Ottomans, who ruled much of the region for around 500 years and imported New World crops such as peppers.

The first known use of the name ajvar was by 19th-century restaurant owners in Belgrade, most of whom were from northern Macedonia, she said.

"Ajvar" is thought to derive from the Turkish word "havyar" for sturgeon caviar. The name was probably meant to denote a similarly exclusive product, said Ognjevic, given the complex preparation and then-costly ingredients such as sunflower oil.

Ajvar's modern-day makers are now trying to expand its loyal fan base.

Philip Evans, a British resident of Skopje, in 2011 co-founded Pelagonia, a Macedonian food range exporting ajvar to more than a dozen countries, including Britain and France.

"We felt that this was a product that had never found its place in world food," the 36-year-old said.

"Look at products like harissa or pesto or hummus for example, they've really become mainstream food items for people, and we just felt that ajvar really had that potential."

A proponent of Macedonia's sweet and sun-ripened peppers, Evans is aware of the "very, very passionate" feelings that ajvar evokes across the Balkans.

"Everybody's auntie makes the best one," he said.