A Meal with… Mister Wellness

A Meal with… Mister Wellness

Inspiration and optimism may be two elements of ‘normal’ Phuket life which are in short supply right now. While there are positives to the lack of international tourists on the island such as quieter, less dangerous roads, cleaner air, empty beaches and a general pace of life which harks back to a quieter, gentler time, there’s no doubt that many island residents are suffering. 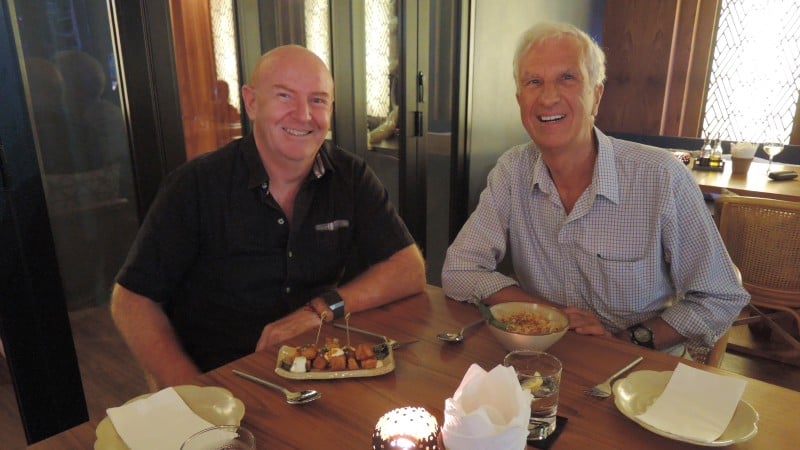 I was thinking about this as I drove north up the bypass road toward Cherng Talay one early evening recently. Certainly, the journey itself was so much quicker and less stressful than during the tourism-driven madness of recent high seasons. But equally, it was impossible not to feel sadness for the shuttered businesses and air of haunted desolation which shrouded the sidewalks.

I was on my way to have supper, after a four-year hiatus, with my old friend Michael Massey and we were meeting at Anthony Lark’s newly-opened venture, Anise Tapas and Wine Bar at the entrance to Boat Avenue.

This new venture turned out to be a charming, lively and welcoming meeting place, with a varied and very reasonably-priced menu featuring everything from Spanish tapas, to Asian and Mediterranean favourites, plus seductive desserts and a comprehensive drinks list. Most importantly, it was busy with a happy buzz of conversation and laughter… exactly what a rather drear version of the Phuket rainy season needed in these difficult times.

I met Michael sitting at a table with Phuket luminary and Chairman of the Phuket Hotels Association Anthony Lark, plus legendary former Phuket Laguna Group Managing Director Michael Ayling. For someone like myself who was there to write a column about the future direction for Phuket, this was a serendipitous hitting of the jackpot indeed!

I met Michael Massey some ten years ago, in the halcyon days when he was the Health and Wellness guru at the lovely beachside Friendship Resort and in charge of their Atmanjai Wellness Spa. Michael had previously worked at Atsumi Wellness Resort and indeed has forged a fascinating career in what was, pre-virus, a burgeoning and vital sector of the Andaman’s overall touristic offering.

Michael grew up in Auckland and went to the famous Mount Albert Grammar School, where he played cricket, hockey and rugby and won a school prize in English and Media, prior to striking out into the world and forging his own very personal type of education and career in the “University of Life”. He travelled extensively and worked in the tourism and resorts sector, all the while crafting his own unique knowledge and understanding within these spheres and building a particular interest and skill-set in the realm of health and wellness – both physical and mental.

Michael’s Phuket adventures began when he arrived in 2003. From 2005, working as their GM, he was the catalyst to building the Atsumi Wellness Retreat into the force it was to become. He then joined legendary resort owner Starr Farrish at Friendship Beach Resort overlooking Chalong Bay and together they formed the iconic Atmanjai Wellness Spa where Michael then spent the next seven years building it into the world-renowned health and wellness centre and retreat that it is to this day.

It was there that I first got to know him, as a part of a Men’s’ Group which he had founded, which introduced we males to the rather alien concept of really talking to other men about the reality of our beings, our emotional states and being forthright and honest with each other. It was challenging, sometimes intimidating, but highly enlightening too.

Michael was a masterful leader of the group and I came to realise that he very much lives the concepts and ideas of mental and physical wellness in his everyday life. Joining Michael again after several years for supper in Anise, he remained the exemplar of good health and radiated an inner calm and power. He eats a totally vegetarian diet and now eschews alcohol after being invited to do so by a “spirit guide” during a shamanic Ayahuasca experience in South America.

Sitting at our convivial table overlooking the bustling outdoor patio area of Anise for supper, it was easy to forget we were in the grips of a global pandemic which was wreaking havoc on the Andaman’s tourism sector. So, I asked Michael how each of us could cope with the travails which this present difficult situation have unleashed. He said that, “challenging exterior conditions like those we now face, throw us back onto our inner resources, mental, emotional and physical, so it’s important to build up and refine our inner strengths whenever we can. We can do this through an ongoing programme of regular, (preferably outdoor) exercise, good diet, ample rest and sleep, meditation and good strong friendship and social connections.

“Limiting exposure to media and social-media overload is also a very good idea and rather than being on-line, try to spend more time with close friends and family to whom you can really talk and expose your emotions.”

I felt very lucky to be sitting in this highly convivial spot and talking to someone as knowledgeable and helpful as Michael, and for those not fortunate enough to know someone like Michael, he does offer specially-tailored coaching programmes that deliver improvements in the physical, mental, emotional and financial realms. For more information, contact him via CoachingTipsReport@gmail.com

Megan Fox goes ‘Rogue’
Soi Dog Foundation calls for CDC to revise ban on import of dogs into the USA
Phuket IVA to hold employment assistance fair
NXPO, Thai Space Settlement Design Competition join hands
‘Friends: The Reunion’ breaks records, breaks barriers
Sustainably Yours: Three green entrepreneurs
The Walrus and the Whistleblower: Heart-breaking documentary shines light on cruel corporate greed
iNoble Clinics in Phuket Expand into the Expat Market
[VIDEO] Phuket: You Should Go There #4 - Kamala
Green Thoughts: The ins and outs of fertilizers
The familiar ‘Woman in the Window’
Unleashed: To feed or not to feed...
In Memory of Daragh John O’Higgins
Accor Live Limitless partners with One Phuket
Expat Life: One Phuket, a worthy cause