PHUKET: The long-awaited Chalong Hospital will not be likely to open until at least the end of the year, the hospital’s director has confirmed. The news comes as the promise of the hospital opening in April flew by last month, a promise made as recently as October.

healthconstructioneconomics
By The Phuket News 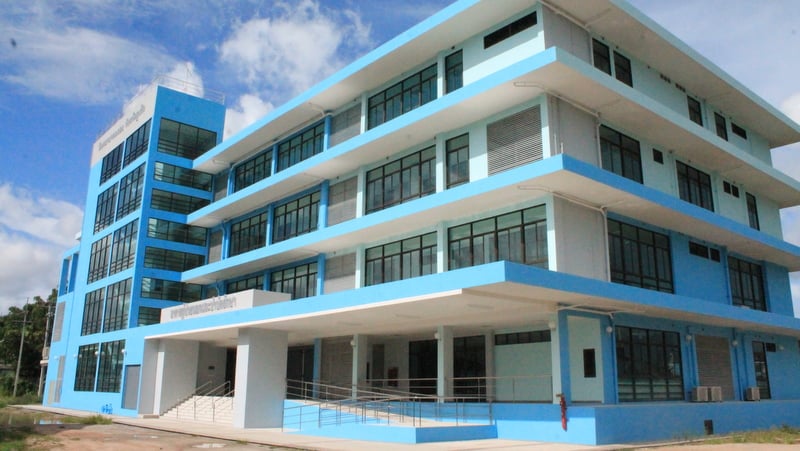 The blue building that has been sitting empty for a year will not open as the Chalong Hospital until at least the end of this year. Photo: The Phuket News Contacted by The Phuket News this week, Dr Chuchart Nijwattana, who already has been assigned Director of the Chalong Hospital but still works out of Vachira Phuket Hospital while waiting for the works to be completed, attributed the delay to the need “to open a full service hospital”.

The explanation given by Dr Chuchart this week flies in the face of his own repeated announcements of what the initial opening would entail, and what facilities and services would be available. It also comes with no public announcements. Replies were provided only on questioning.

Dr Chuchart this week instead described the blue building that has been sitting empty since May last year as the “outpatient building” only – a description he has never volunteered before.

He also said that a budget of only B103 million was provided, not B108mn budget as repeatedly announced as already given to the project – and that all B103mn was spent on construction of the blue building alone, another factor that he not only blanked, but contradicted with his own explanations in October last year. It was not explained why the budget was allegedly reduced by B5mn.

Worse, not only was B103mn spent on just the construction, the plans did not even account for an x-ray room and specially supported and lined walls to accommodate a CT scan machine.

That explanation this week came while Dr Chuchart admitted that the plans for the building were the standard “off the rack” design already approved by the Ministry of Public Health – and already used for hospitals already in operation elsewhere throughout the country.

“We need to open a full service hospital. We have to modify this building (the blue building) to have all the components in one building,” Dr Chuchart told The Phuket News this week.

“Vachira Phuket Hospital as our host hospital sent the request to the Office of the Permanent Secretary of the Ministry of Public Health in November 2018, but we are still awaiting approval,” Dr Chuchart said, without acknowledging that for the past five years the plan given to the public was always to open the single building first and expand the hospital facilities later.

In October, Dr Chuchart said, “The first priority is to have the Accident & Emergency Centre at the hospital fully operational. Next will be the Outpatient Department, which will also open in April. Then the Inpatient Department with beds for 30 patients on the third floor will be added in June 2019,” he added.

While Dr Chuchart’s explanation this week was far removed from his previous public statements, he did make the stunning revelation that a separate two-story “x-ray room building” will be built from a B14mn donation from the administrators of the Put Cho Shrine.

The funds from the generous donation will also pay the for the x-ray machines, Dr Chuchart announced.

The new plans for the expanded version of the hospital require a further budget of B153mn to be provided by the Ministry of Public Health (MoPH), bringing the total cost of the hospital to B275mn, and delaying its opening even further.

“If the Office of the Permanent Secretary of the Ministry of Public Health approves the request in May we think it will take about six months to complete the construction, about the end of 2019,” Dr Chuchart said.

“We intend to open outpatient services and have beds for 20 inpatients include moving A&E department from the small building (where it is already open and functioning now) to the outpatient building (the blue building) to be open 24 hours by the end of this year,” he added.

“We believe that in December 2019 we will be able to open to provide services,” Dr Chuchart said.

The request for B153mn is to expand the hospital by building a seven-storey dedicated inpatient building with 156 beds.

“If the request is approved by the Budget Bureau, we expect to start construction in October 2019 and the construction will finish in 2021,” Dr Chuchart said.

“Other buildings such as the hospital laundry, wastewater-treatment systems, residential buildings for doctors, nurses and staff, we plan to be in the next year’s budget plan,” he added.

Regarding changes to the blue building now requested, Dr Chuchart said, “The Ministry of Public Health has doubts about where the funds to provide the budget will come from and whether making any modifications to the building will affect the building’s warranty as provided by the contruction contractor.”

However, prone to making more contradictory statements, Dr Chuchart did say he wanted to assure people that they should not worry, as the construction of the blue building is under contractural guarantee for two years.