Aggression is a term that’s often misused. People see another dog barking and label it as aggressive, seemingly forgetting that barking, growling, snarling, etc are all part of canine communication. 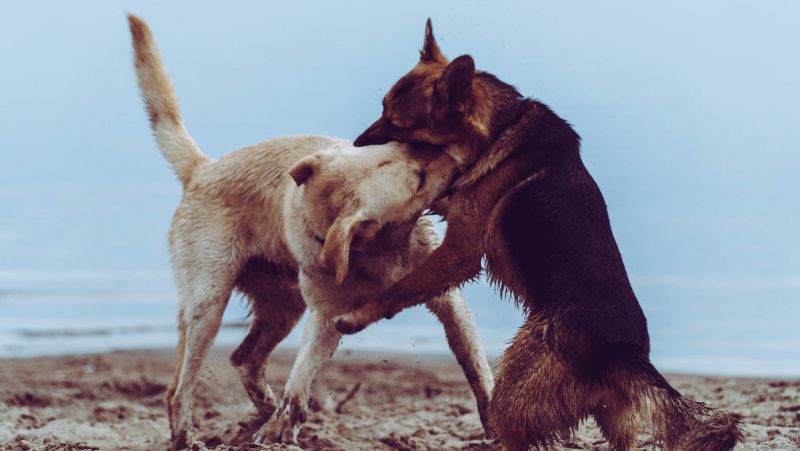 Aggressive play is normal and acceptable, as long as all dogs are happily participating. Photo: Renata Cholpankulova / Pexels

There’s an abun­dance of labels for aggression, with new ones added all the time, but regardless of the label, there are many commonalities and I’ll list a few of them here.

Before we go any further, though, true aggression is seriously dangerous, and if you are challenged by your dog’s aggressive behaviour, I strongly urge you to get in touch so we can help create and implement an appropriate behaviour management and modification programme.

By far the most commonly seen type of aggression, and one that is often responded to most inappropri­ately, is fear-related aggression. When a dog shows signs of fear, they are trying to compel those nearby to move away. But to make matters worse, it’s natu­ral for humans to try to comfort someone who ap­pears afraid or, worse yet, take them closer to that which they are fearful of. This is exactly what the fearful dog does not want, especially from a stranger or from someone who may have punished the dog in the past for eliciting said behaviours.

If a fearful dog is trapped, or has been trapped in the past, they may take a “the best defence is a good offence” approach, especially if there is a history of punishment for their fearful displays. Keep in mind that “trapped” can include being on a leash, being followed, being cornered when they try to retreat or simply feeling confined in a small enough space that they’re uncomfortable (such as a living room or a study).

Anyone who has worked with shelters or rescues will know that when you go to pick up an injured dog that has been hit by a car, they are not always calm, friendly and helpful. Dogs who are in pain, regardless of breed, generally don’t want to be touched and may show signs of aggression in an effort to get people or other animals to leave them alone.

What many owners don’t realise is that even less obvious pain can be sig­nificant contributors to a dog’s propen­sity to bite. Arthritis, spinal problems, sore muscles, gastrointestinal issues – there are numerous “invisible” condi­tions that can cause or contribute to a dog’s aggressive behaviour.

An ageing dog with increasing ar­thritic pain may begin to growl at ap­proaching children because they know from past experience that those chil­dren may fall on or try to play roughly with them. “You’re making me very uncomfortable,” the dog says. “Please don’t come any closer.” A protective par­ent, outraged that the family dog would growl at the child, physically punishes the dog, adding to their pain as well as their anticipation of punishment when children approach, thus increasing the likelihood of them becoming more ag­gressive toward children, not less.

Aggressive play is normal and accept­able, as long as all dogs are happily participating. This can include growl­ing, biting, wrestling, chasing, body slamming and more. But when things go wrong, it turns into play aggression. This can happen when one participant becomes uncomfortable with the es­calating level of arousal and tries to signal that they wants to tone things down. If the other dog fails to respond and things continues to escalate, they may aggress in self defence in an effort to stop the action.

While the first participant is often blamed for starting the fight, it is, in fact, the other dog’s fault for failing to respond appropriately to the request to back off the level of arousal. This is one of the primary reasons I’m against dog parks, uncontrolled play dates and out-of-control dogs not being on a leash.

Often called “resource guarding”, this is a relatively normal behaviour. Think about it: you walk away from your house, you lock the door – you’re resource guarding. However, there’s a rather flawed belief among dog owners that they have the right to take any­thing away from their dog anytime they please, such as removing food bowls during a meal so the dog learns to ac­cept it. Er, nope. Bad idea.

Trust and respect are the key factors here, and our dogs should trust that we won’t challenge them for valuable items. We need to teach our dogs a voluntary “trade” behaviour, so we can safely ask them to voluntarily relinquish some­thing when we need them to do so.

This behaviour occurs when a dog is highly aroused but thwarted from ad­dressing the object of their arousal. Fence-fighting is a classic example. Unable to reach the dog on the other side of the fence, the dog may redirect aggressively in frustration to a canine companion on their side of the fence or to an owner who is attempting to inter­vene in the conflict.

This is by no means a complete list of the various aggression labels. Others in common use include predatory, social protection, maternal, territorial, bar­rier and idiopathic aggression. What you call the behaviour is, in many ways, less important than how you interpret and deal with it.

Modifying aggressive behaviour can be challenging but it is possible. Remember, your dog isn’t giving you a hard time – he’s having a hard time.

CPA is the only K9 organisation in Thailand accredited with the Certi­fication Council for Professional Dog Trainers (CCPDT), and as an American Kennel Club (AKC) Evaluator.