PHUKET: The lack of clear information about the July 1 reopening of Phuket to receiving vaccinated foreign tourists needs immediate attention before the silence does any more damage to just the confidence among prospective tourists that local officials have any idea of what they are doing to prepare for the milestone event.

opinionCOVID-19tourismhealth
By The Phuket News 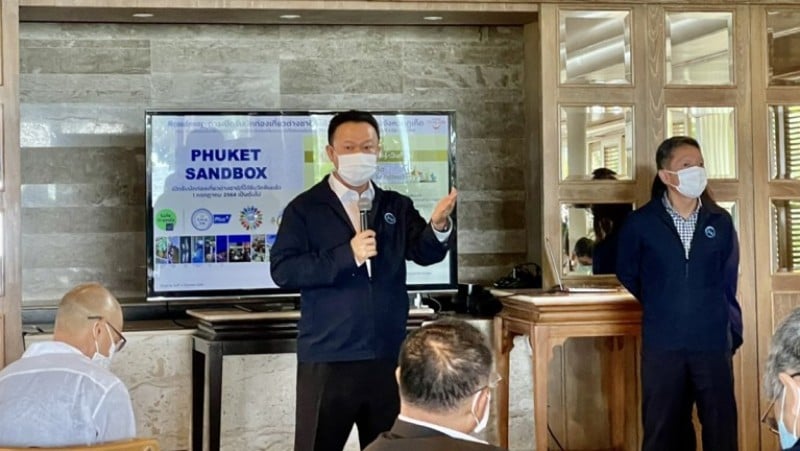 Tourism Authority of Thailand (TAT) Governor Yuthasak Supasorn was in Phuket in person yesterday (June 12) to make sure the message for July 1 was being heard, yet more needs to be revealed publicly to instill confidence among the public. Photo: TAT

International expert reports calling the preparations for the July 1 reopening “chaotic” is being polite. Not in that nothing is being done, but the near-daily announcements of changes in the requirements and the scramble to make sure hotels and other tourism-service businesses are ready is not helping.

Having reports circulate just yesterday citing Tourism Minister Phiphat Ratchakitprakarn saying that Phuket “will not be ready” for July 1 would have deterred any prospective tourists from making any decisions of travel to Phuket – even if just for day until they learned that Tourism Authority of Thailand (TAT) Governor Yuthasak Supasorn was in Phuket in person that same day (yesterday) to lead a workshop with leading Phuket tourism figures about making sure that businesses and services that will be open for the reopening are so in full compliance with anti-COVID measures.

It should be taken for granted that if July 1 were no longer going ahead, the governor of the most important international tourism agency for the country would not be wasting his time with leading such a workshop. Mr Yuthasak’s attendance in person was to prove one point only: a clear message of the importance he is personally giving to July 1.

The problem stems from right here in our province, where our local leading provincial officials are not providing the assurances needed to instill confidence in the messages the public is receiving. The lack of updates and reports – even if the answer to any particular issue, say the vaccination of expats on the island, is “we do not know right now, please wait” – forces people to look elsewhere for answers.

That is how expats across the island started looking at the ThailandIntervac.com/expatriates web portal to register to be vaccinated, exactly how they were told repeatedly by officials in Bangkok. It was not until the grapevine advice of seasoned expats on the island, using their own contacts and understanding of local bureaucracy, and of the required ‘kreng jai’ kowtowing to superiors in the capital, that it has become clear that Phuket expats are not to be registered by that system.

The public relations exercise has been a farce. Mr Yuthasak’s visit yesterday was not reported by local government agencies. Not even a link to the report posted in the TAT’s main website was shared on Phuket’s official channels, leaving any observers open to taking the report of Mr Phiphat’s claim – which still may be true – at face value. People just do not know what is true.

Silence on the last three COVID deaths in Phuket – now three deaths in under two weeks – also leaves a chasm in people’s confidence, as everywhere else in country seems to be appraised of the COVID situation in their provinces.

If Phuket officials are withholding information because they have been ordered to by superiors in Bangkok, they must say so. If higher-ranking officials are making announcements directly regarding Phuket while elsewhere in the country, those reports must be relayed through Phuket officials.

Constant reassurance is needed. Without it, Thailand will reap what it sows through confusion.