PHUKET: Phuket Vice Governor Wongsakorn Nunchukan on behalf of the Phuket provincial government has urged people across the island to use household water sparingly in order to make the island’s reserves last as long as possible. 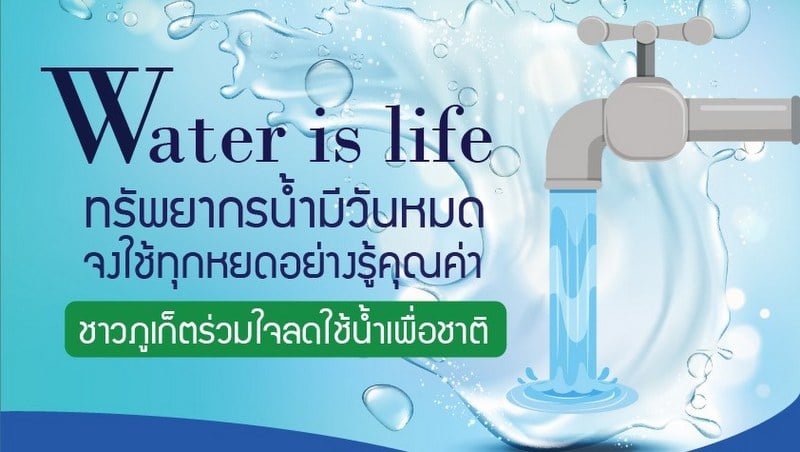 A poster posted by the Phuket office of the Public Relations Department today (Nov 11) calls on people to use household water as sparingly as they can. Image: PR Dept Vice Governor Wongsakorn made the call at a meeting of the provincial water resources subcommittee at Phuket Provincial Hall on Friday (Nov 8).

“Phuket people, please save water, so we can have water to use all year long,” Vice Governor Wongsakorn said

Vice Governor Wongsakorn pointed out that the provincial water resource subcommittees was formed on Nov 4 by order of the Governor’s Office to come up with a master plan for water management and to prevent water shortages.

“Water usage information will be used to make a plan and solve the water shortage problems in each area,” he said.

Of note is that the ONWR operates directly under the Prime Minister’s Office. Specifically, Prime Minister Prayut Chan-o-cha is the Chairman of the OWNR Executive Committee, and is directly overseeing efforts to avoid water3 shortages across the country. (See story here.)

At the meeting on Friday, Phuket Agricultural and Cooperatives Office Chief Atchariya Chantarawong said that while Phuket has been experiencing greatly decreased rainfall this year, the Department of Royal Rainmaking and Agricultural Aviation have continued their efforts to help replenish Phuket’s main reservoirs by creating artificial rain.

The last efforts of the ongoing campaign is currently underway, from Nov 5 to 15, he said.

Somsawat Chaisinsod, Director of the Phuket Provincial Irrigation Office, gave his projected estimates of how much water Phuket needed each year.

Mr Somsawat estimated that Phuket has around 13-14 million tourists on the island each year, who collectively use about 10mn cubic meters of water throughout the 12 months.

“In total, Phuket needs about 71mn cubic meters of water per year,” he said.

The meeting was also told that research conducted by the Faculty of Technology and Environment at the Prince of Songkla University Phuket Campus in 2017-18 found that there are 109 surface water resources in Phuket: 41 in Thalang (total capacity 5.3mn m3), 22 in Kathu (capacity 7.1mn m3), and 46 in Muang Phuket (capacity 8.6mn m3).

The total capacity of the 109 surface water resources is 21mn m3, not including the three main reservoirs, Bang Wad in Kathu, Bang Neow Dum in Srisoonthorn and Khlong Katha in Chalong.

The study showed that Phuket needs about 80mn cubic maters of water per year and the need for water has been increasing every year.

One household uses on average about 280 litres of water per day, the meeting was told.

Areas where households use the most water on average are Tambon Sakoo near the airport, Tambon Kathu, Patong, and Phuket Town, respectively.

From the information presented, the meeting agreed as its “short-term plan” of within one year to search and evaluate water resources to use underground water sources.

The “mid-term plan” of within three years is to support and work on a “water bank” project and build “a system to manage water with A.I.”

The long-term plan within five years is to study and work on desalination water projects, water recycle projects, and artificially replenishing underground aquifers so that the water recycled becomes re-usable.

The officers at the meeting were told that the Phuket Government was to present their findings and recommendations to the ONWR on Dec 4, as instructed by ONWR Secretary-General Somkiat Prajamwong during his visit to Phuket on Oct 28. (See story here.)

Meanwhile, water supply from Bang Wad reservoir, the island’s main water source, was reduced by 25% last Friday (Nov 1), and will be reduced to half its regular flow from Jan 1, the busiest week for tourism on the island for the whole year.

Also, any water currently left the Bang Neow Dum reservoir will be held back for use in case of emergencies.

The move comes as Graisorn Mahamad, Chief of the Phuket office of the Provincial Waterworks Authority (PWA), struggles to make reserves last.

Under a project costing B585mn, the PWA is using private water sources for immediate supply to ensure houses and businesses across the island still receive running water. (See story here.)