PHUKET: A beach cleanup held at Nai Yang today (Sept 21) by an estimated 800 participants netted a total of 952.5 kilograms of litter, waste and discarded items from the sands and dumped along the treeline.

tourismmarinepollutionenvironmentnatural-resources
By The Phuket News 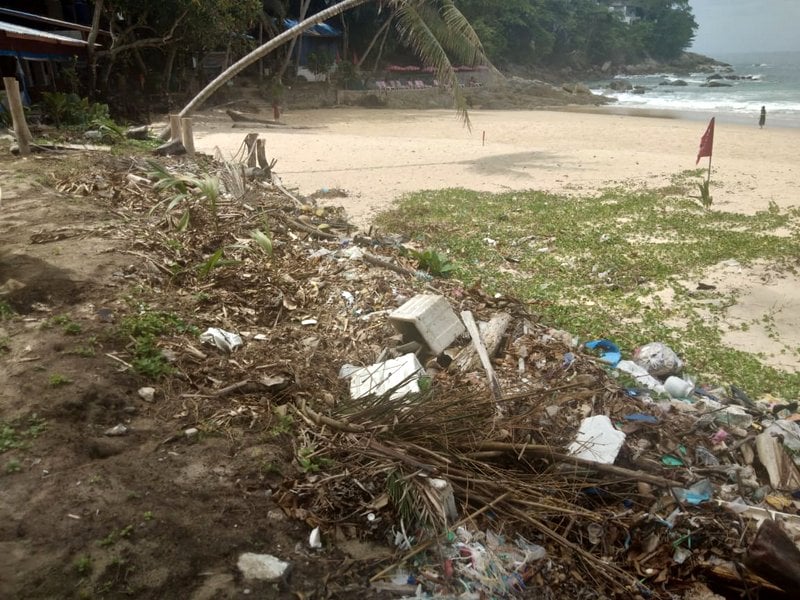 Among the items dumped along the Surin beach treeline is a discarded toilet. Photo: Supplied The cleanup was organsied by the Phuket chapter of the Red Cross along with co-operation from a host of government offices on the island.

The section of beach cleaned today is within Sirinath National Park.

A total of 23.5kg of glass and metal waste was collected, along with 764kg of plastic and rubber and 22 pieces of hazardous waste. A total of 165kg of organic matter, mostly branches washed ashore were also removed and added to the tally collected.

Phuket Governor Phakaphong Tavipatana chaired the official opening of the garbage collection campaign, joined by his wife Ms Sittinee Tavipatana. As the wife of the incumbent Governor, Ms Sittinee is the customary President of the Phuket chapter of the Red Cross Society in Thailand.

“The activity today is very in line with [what is needed for] Phuket, because Phuket is an Andaman coast province that has beautiful beaches. It attracts both a lot of Thai and foreign tourists to visit each year, which continuously generates revenue for the province and the country,” he said.

“Therefore, the maintenance of coastal resources on the beach is an important mission that all sectors must be aware of, give importance to and participate in, to keep our beaches clean and beautiful,” he added.

The event was described as being held today as on the occasion of International Coastal Conservation Day, though elsewhere the day is marked on Sept 15 or thereabouts, usually on the third Saturday or Sunday of the month of September.

Ms Sittini said, “My purpose is to encourage all sectors to realise the [importance of] environmental preservation and conservation of coastal areas and the sea, and creating awareness about the problem with garbage as well as creating good awareness in all sectors.”

However, Surin Beach to the south remains neglected, with piles of garbage and discarded items dumped there growing larger despite the beach’s popularity with tourists.

The trash problem at Surin Beach has remained neglected for many months, to the point that concerns are being raised about the beach’s appeal to tourists.

One photo supplied to The Phuket News showed a discarded toilet dumped near the beachfront.

Surin Beach has been the focal point of many local development issues, with local residents filing a formal complaint over the state of the newly installed wastewater treatment plant there and at Bang Tao Beach nearby.

That complaint is now being investigated by the Department of Special Investigation (DSI). (See story here.)

Surin Beach was most recently the focal point for beach safety after the ongoing legal dispute to provide lifeguards at the beach left the beach unguarded, leaving tourists to be rescued by a local surfer. (See story here.)

The issue with lifeguards now seems to be resolved for the time being. (See story here.)