A total of 277 road deaths over Songkran

A total of 277 road deaths over Songkran

THAILAND: A total of 277 people were killed and 2,357 injured in almost 2,400 road accidents over this year’s Songkran holiday period, with drink-driving involved in over a third of crashes reported this year, traffic officials said yesterday (Apr 17). 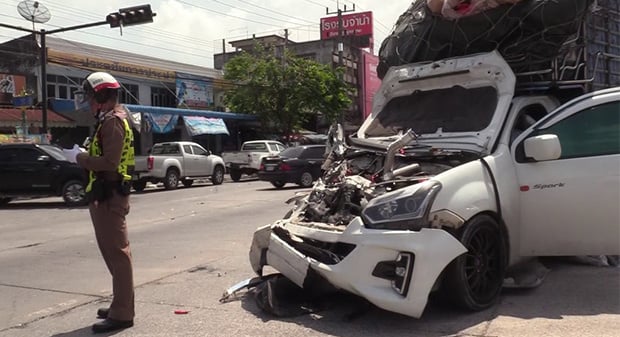 Deputy permanent secretary for the interior and chairman of the road accident prevention sub-committee, Asnit Samphantharat, said the figures represent accidents reported between April 10-16, when authorities stepped up its road safety campaign in light of the anticipated surge in holiday traffic across the country.

On Friday, 26 people died and 255 others injured in 253 accidents. Speeding was the leading cause of accidents that day, followed by drink-driving, he said, before adding 83% of Friday’s crashes involved motorcycles.

Over the seven-day period, Nakhon Si Thammarat saw the highest number of accidents with 106, followed by Chiang Mai (77) and Songkhla (69).

Pathum Thani had the highest number of fatalities at 10, followed by Bangkok (9) and Chiang Mai (9).

Drink-driving was cited as the cause of 36.6% of all accidents over the holiday period, followed by speeding (28.3%) and cutting lanes (17.8%). Motorcycles were involved in 79.2% of the accidents, followed by pickup trucks.

Almost half a million motorists, or 459,644, faced charges ranging from failing to wear helmets, not having a valid driver’s licence and failing to fasten seat belts.

Meanwhile, Suriyan Hongvilai, spokesman of the Office of the Judiciary, said yesterday a total of 12,664 traffic offences were brought before court between April 10-16, 12,627 of which were settled in courts.

Of the total, 12,213 cases involved drink-driving, followed by driving without a licence (816), driving under the influence of narcotics (40) and reckless driving (34).

The number of accidents over the Songkran holiday was higher than during the New Year’s holiday by 3,212 cases.

Phuket concluded the seven days of danger campaign with one death and 21 injuries recorded.