PHUKET: Much-welcomed news is that the organisers of the Bangkok Midnight Marathon (BMM) 2020 have apologised for their initial decision to ban all foreigners from taking part in the event and will open the race to expat runners.

opiniontourismnatural-resources
By The Phuket News 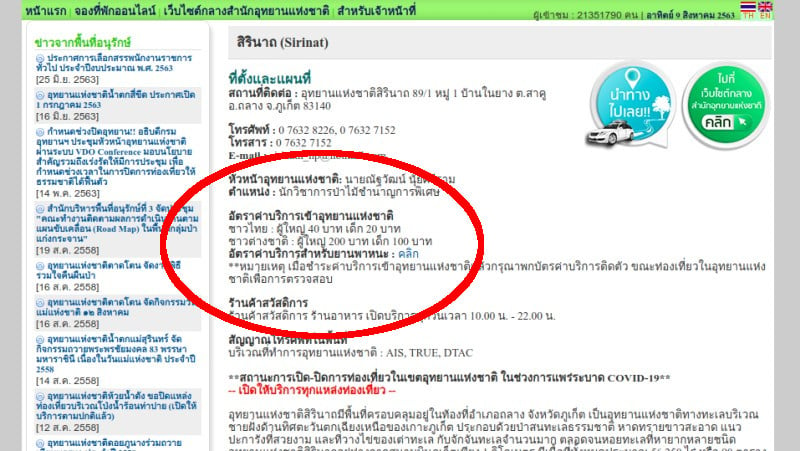 The official web page for Sirinath National Park in Phuket with the different entry prices for Thais and foreigners highlighted. Image: Screenshot

The move followed a storm of criticism for a policy perceived as openly racist, much like the backlash temple administrators at Wat Pho suffered after their similar decision in June to ban all foreigners from entering the temple.

Anyone who bothered to read beyond the headlines in both cases would quickly realise that the decisions were not racist in intent – they were based on pure fear of becoming a focal point for the spread of COVID-19. If the administrators in both cases had focussed their attention on that – and publicised that point clearly – then neither would have found themselves amid a maelstrom of criticism online, criticism quickly reached far and wide in this age of modern communications.

What is plainly racist is the government policy under the Department of National Parks, Wildlife and Plant Conservation (DNP) to charge foreigners much higher prices than Thai citizens to enter their national parks and natural reserves.

As simple as it gets, Section 27 of the current Constitution of the Kingdom of Thailand – the English version provided by the Office of the Council of State “for translation purposes only” (the last nine versions of the Constitution promulgated in the past 13 years can be seen here) – clearly states:

Section 27. All persons are equal before the law, and shall have rights and liberties and be protected equally under the law.

Unjust discrimination against a person on the grounds of differences in origin, race, language, gender, age, disability, physical or health condition, personal status, economic and social standing, religious belief, education, or political view which is not contrary to the provisions of the Constitution or on any other grounds, shall not be permitted.

The argument stops there: “Unjust discrimination against a person on the grounds of differences in origin”. The DNP’s dual pricing policy is in clear contradiction to the Constitution of Thailand. The policy in itself is illegal, and still supported by the current government. Period.

However, unlike as with the organisers of the Bangkok Midnight Marathon, the DNP faces a much more complex dilemma with its dual pricing.

The policy of charging Thai nationals token entry fees to national parks and reserves has one clear intent: to give Thai nationals open access to enjoy the beauty of their own country, without punishing the poor. That is a tough one to argue against.

Yet the dual pricing policy as it stands today presents itself as targetting only one segment of presumed richer customers, and the discrimination is based on a person’s origin, not on their capacity to pay.

If the DNP wants to discriminate according to capacity to pay, then it should do so. The current policy is an anachronism of an era that deserves to be left behind.

The same goes for the multi-tiered maximum prices for health services at public hospitals made legal last year.

Common practice in other countries for government services is to set standard prices and offer discounts to presumed low-income earners such as students, the unemployed and the elderly.

Such pricing structures come with their own problems, such as rich people pay the same price as the poor, but the equity and principle of not discriminating along racial lines is avoided, and such pricing structures have already long been tried, tested and accepted as the norm elsewhere around the world, not just in the so-called Western countries. Thailand should feel free to join the rest of the world in implementing such policies.